Changing of the Guard at Corpus Christi Grade School 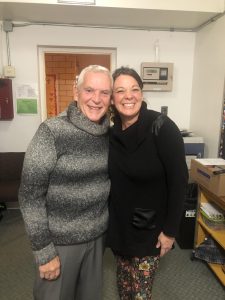 WHEELING — Dick Taylor believes his 44-year career as a teacher and principal at Corpus Christi School in Warwood was “God’s plan.” It’s the only way he could explain how a young man from East Ohio, fresh out of college and new to teaching, could land a job that would envelop his life for more than four decades.

Long before the world was hit with the COVID-19 pandemic, Taylor had made plans to retire at the conclusion of the 2019-20 school year. While he had some apprehension, he said he knew he would be leaving the school in good hands with the appointment of Shannon Wall as the new principal. After all, Taylor had taught Wall in sixth grade and has worked with her since 2009 when she began teaching at Corpus Christi, too.

“I was elated. I knew from the very beginning she was the best person for the job,” Taylor said last week. “She has the love of the school and its best interest at heart. No question in my mind, she’s the right fit.”

Taylor spent one year teaching at various substitute positions in Belmont County before a chance meeting with Edna, a female friend from college, brought him to Corpus Christi. Little did he know that the chance meeting would bring about a lifetime in education at Corpus Christi and Edna becoming his bride.

“She told me there was a teaching job open at Corpus Christi where she was teaching. I applied and started that year,” Taylor recalled.

Taylor said he has worn many hats “graciously” during his teaching and administrative career. He has taught math and science. He was also the art teacher, putting into practice the art degree he earned along with his teaching credentials. The halls of Corpus Christi are papered with artwork and inspirational messages for all to see every day,

Sitting in the library at the school last week, Taylor appeared at ease with the idea of retiring and doing some traveling when the pandemic slows. However, his emotions got the best of him when he described how Corpus Christi has been his second family. He has taught three generations of families.

“When I started here it was chalk and blackboards and overhead projectors. Now it’s smart boards and one-to-one devices for students,” Taylor observed. “I have seen how education has changed. My brick-and-mortar career is ending with a new type of learning.”

Taylor said the biggest challenge for educators today is keeping up with the changes in society that have occurred over the years. He said he’s proud that students follow the Christian morals and values on which the 104-year-old school was founded.

“Society has changed. Our values have not. I have been blessed with a professional, seasoned, well-educated staff,” Taylor said. “Parents’ support always has been tremendous … we’re one family. It will continue.”

Taylor said his decision to retire was made because “I’m old enough to retire and young and healthy enough to enjoy it.”

Taylor and his wife have one son, Sam, who they hope to see more of as they do some traveling in the future. Edna, who has been teaching for 44 years, moved on from Corpus Christi and currently teaches at Center McMechen Elementary .

“I plan to make sure Shannon has a smooth transition. Corpus Christi has been my life. I can’t just walk away. I will volunteer for some of the projects at the school. I have many avenues to explore,” Taylor said.