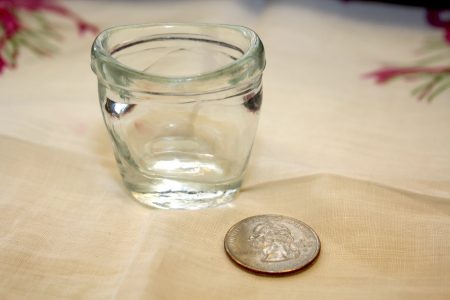 Photo Provided This clear glass eye cup dates to the early 20th century and is marked Made in the U.S.A.

I’m a fan of most things “old school.” Oftentimes, the old way of doing something is effective, simpler and cheaper — so why not embrace it?

For example, during this time of pandemic when many of us are suffering from overuse of our eyes due to computer strain, or perhaps we are concerned about germs, the use of an eyecup makes sense.

An eye wash cup is a handy tool that offers a way to rinse your eye with appropriate washing solution to cleanse or comfort when problems arise. Plus, the antique versions are lovely glass models that are easily sterilized.

But why collect these small cups? That’s a great question. I remember my mother was interested in them and bought many bottles of Collyrium, a commercial eyewash, available at the drug stores in the 1970s.

It sold in cobalt blue bottles with plastic cups though early models had glass versions of the cobalt cup.

Amazingly, these are now listed on eBay, so collectors must still be at it, seeking this vintage medicine bottle and cup, even though the cup is plastic. (New in the box can bring $20.)

Antique glass versions are the most sought after and these are quite pretty in different colors, displayed on a shelf. Plus these are a relatively inexpensive treasure.

But in a world of eye care where eye drops are common, the return of the eye cup for cleansing makes sense. After all, a bottle of eyewash (mostly water with boric acid) cost me less than $2 when I bought it recently at Kroger and the relief you feel from washing your eyes is immediate.

According to an old issue of Antiques Journal that I have, it wasn’t till the 1970s that the eyecup craze took off. This was the era when so many hobbies in the collecting world were hot. There was even a monthly newsletter called “Eye Cup News,” for collectors to enjoy and share.

Eyecups were created in more materials than glass and plastic though. Silver cups were used in Europe and date back to the 16thcentury and even the Egyptians were thought to have used them.

Wedgwood produced classy versions decorated and plain. Versions are either footed or not and stand just a few inches high. According to the Antiques Journal in an article written by Marian D. Kealey (she also wrote a book on this topic), the earliest record for eye wash cups in the U.S. dates to a tableware catalog dating to 1855-63. It was from a Pittsburgh firm, McKee Brothers.

The biggest name in the collectible world of this small treasure is the John Bull eye wash cup, patented in 1916, in England.

It is distinguished by the rim, which is rolled inward, though there are many colors to choose from in this stemmed glass cup.

I also discovered that there were traveling versions of eyecups. I guess it makes sense that you would need one when traveling along dusty roads, especially without today’s medications for allergies and eye irritations.

The cobalt blue color of some eye wash cups is usually associated with Wyeth Laboratories of Philadelphia. This is the color glass that is always so popular with collectors. Wyeth made several types of cups on stems or without and some were use on top the eye lotion bottles.

Like many antiques, some versions of these collectibles were marked, others weren’t so you have to study up and talk to other collectors to find out how to learn the ropes.

The most interesting version to me is the fish bowl or spittoon type of eyecups that are shaped with an enlarged bowl below the cup. I’ve read that there is even a version that has an eye painted in the bottom of the bath, sporting the words “here’s looking at you.”