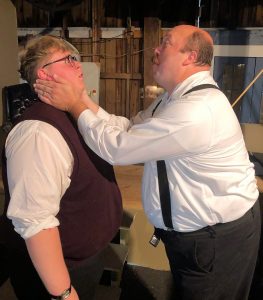 Ben Games and Justin Swoyer, from left, rehearse for the Brooke Hills Playhouse production of Ken Ludwig’s award-winning comedy, “Lend Me a Tenor.”

WELLSBURG — As the Brooke Hills Playhouse prepares for the final weekend of its production of Ken Ludwig’s award-winning comedy “Lend Me a Tenor,” the show’s cast is hoping that their audiences are having as much fun as the actors. According to director Evan Oslund of Wheeling, “This cast has laughed together throughout rehearsal in ways that I never could have predicted.”

Oslund continued, “Not one actor has gone without breaking character at least once during the process due to the fun that everyone is having together.” Audiences can join in the fun at 8 p.m. today and Saturday, Sept. 27-28, with a matinee at 2 p.m. Sunday, Sept. 29. Reservations are available by calling or texting the Playhouse at 304-737-3344. Municipal Mutual Insurance is the Playhouse’s 48th season sponsor.

“Lend Me a Tenor” is set during a 1934 Cleveland Grand Opera production featuring the temperamental Italian tenor Tito Merelli in the lead role. A series of hilarious mishaps and misunderstandings put the performance, the opera company and Tito’s marriage in mortal danger before the inevitable happy ending.

The script for the current production includes recent revisions by Ludwig. The main change is that the opera being performed in the play has been changed from Giuseppe Verdi’s “Otello” in the original script to “Pagliacci” by Ruggero Leoncavallo in the revised version.

Ludwig revised the script after realizing that a white actor performing the title character in “Otello” in blackface, while historically accurate for the 1930s, would come across as racially insensitive to 21st century audiences. For “Pagliacci,” the title character is a clown who wears clown-white makeup. “The comedy is still there in force, but without the risk of offense,” Oslund observed.

A major challenge for any production of “Lend Me a Tenor” is finding actors who can sing grand opera credibly. Oslund said he his cast was up to the challenge, despite the fact that only one cast member had a background in opera. “It took a lot of work to make the opera credible but, with the help of Lakin Weaver, our music director, the actors were able to portray operatic singers believably,” Oslund said.

The switch of the opera from “Otello,” which tells of the downfall of a powerful general to “Pagliacci,” in which the title character is a clown, opened up some comedic possibilities for the actors, “I had the actors incorporate very over-the-top movement into their characterizations, making the clowning underline the ‘Pagliacci’ element in the story,” Oslund said.

Oslund said the play was as much of a challenge for him as a director as it was for the actors. “This was easily the most difficult piece I have ever directed, but I firmly believe the end product will be well worth it for our audiences,” he said.