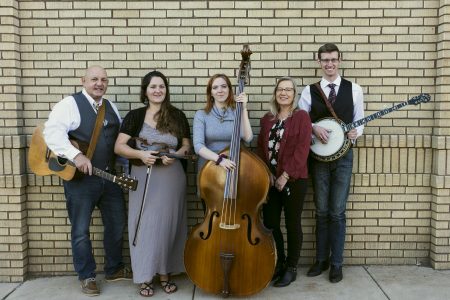 MOUNDSVILLE — Crandall Creek Band will compete in the 46th annual Society for the Preservation of Bluegrass Music of America Bluegrass Music Awards Show on Feb. 1 in Nashville, Tenn.

Crandall Creek was founded by Jerry Andrews of Moundsville in 2015. Andrews had a vision for a bluegrass group with musicians who reflect his West Virginia roots in the songs they play and write.

In Crandall Creek (Andrews named the band after one of his favorite places to fly fish in Wyoming), he has assembled a group that plays bluegrass with enthusiasm and has a passion for writing original material.

The band is led by Andrews on guitar and vocals. Kathy Wigman Lesnock brings her voice for lead and harmony vocals. Versatile musician Dustin Terpenning plays banjo, mandolin, guitar and bass. While Lilli Gadd spends most of her time singing and playing bass fiddle, she also can pick up a banjo, guitar or mandolin. Heather Wharton plays fiddle and adds her voice to the band. Virtuoso guitarist Roger Hoard will be with the band for its appearance in Nashville.

Crandall Creek has played a number of shows at Moundsville’s historic Strand Theatre and has shared the stage with such national bluegrass acts as Donna Ulisse and the Poor Mountain Boys, Volume 5, Alecia Nugent and Alan Bibey. The band also has made multiple appearances at the Railyard in Elkins, W.Va., the Purple Fiddle in Davis, W.Va. and other venues in West Virginia, Maryland, Ohio and Pennsylvania.

Crandall Creek donates money from shows to deserving charities. Andrews created the Bluegrass Music Endeavors Foundation (www.bluegrassmusicendeavorsfoundation.com), as a non-profit 501c3 to give back to the community.

The primary purpose of SPBGMA is to preserve, promote and encourage new development in bluegrass music through events such as the annual awards show.