Melissa Riggs announces the marriage of her daughter, Courtney Noel, to Zachary Keegan Williams, son of Darrell and Mary Williams of Waynesboro, Mississippi.

The wedding took place in the First Baptist Church of Wheeling on June 6, 2020 and was officiated by the Rev. Darrin Wright. An outdoor reception was held at the home of friends.

Ashleigh Shepherd served as matron of honor with bridesmaids Alyssa Hough, sister of the bride, Krista Rogers, cousin, Sarah Edwards, and Tyler Williams, sister of the groom. The best man was David Jordon, and the groomsmen were Jake Stone and Riley Lynch. Ring bearers were the bride’s nephews, Levi and Caleb Hough.

Courtney graduated from John Marshall High in 2011 and West Liberty University in 2016. Zachary graduated from William Carey University in Hattisburg, Mississippi. Both received their master’s degrees from the Southern Baptist Theological Seminary this spring. Williams works at Cabela’s and is continuing his studies toward a doctorate degree.

The couple resides in Louisville, Kentucky. 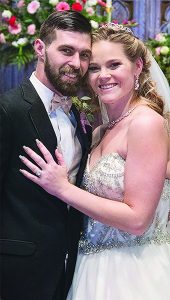