JENNIFER COMPSTON-STROUGH For The Intelligencer 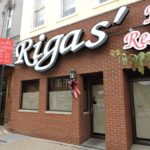 Photo by Jennifer Compston-Strough Paper covers the windows of the now-closed Rigas Restaurant in downtown Bellaire on Tuesday. Owner Clara Rigas made the decision to shut the doors Sunday after 54 years in business.

After 54 years in business, Rigas Restaurant closed its doors for good on Sunday.

Rosalie Kovalyk said her parents, Clara and Mike Rigas, opened the eatery that served family-style meals made from scratch at 33rd and Belmont streets on Nov. 17, 1963 — less than a week before President John F. Kennedy was assassinated. Rosalie was in the second grade. She started working in the restaurant a year later and never stopped until this past Sunday.

That’s when her 85-year-old mother announced to the family: “I think it’s time to close.”

Kovalyk said the restaurant was open as usual on Saturday. The family went to church on Sunday morning and, when they arrived at the restaurant afterward, Clara Rigas had made up her mind.

“We didn’t know Saturday was our last day,” she said, adding that she doesn’t think her mother actually made the decision until Sunday. “She turned the key to open it up, she has the right to turn the key to close it.”

Kovalyk said the restaurant was being painted in anticipation of increased business that might arrive with the PTT Global Chemical ethane cracker plant that has been proposed at Dilles Bottom. Some new equipment was recently purchased for the kitchen, and the family was “trying to think ahead.” She added that business had been good in recent months, but she believes her mother wanted to close “on an up note.”

Kovalyk said her father died in 1999. From that point on, Clara always said she was going to lock the doors some day. That day finally came 18 years later on Sunday.

Kovalyk said the decision to close was not an easy one for her mother, and it has not been easy on the rest of the family or the restaurant’s employees. Kovalyk and her brother, Christopher Rigas, went together to each employee’s home to break the news.

“Our employees are the best in the world. I expect excellence …,” Kovalyk said. “It was the hardest thing I’ve ever had to do in my life.”

Christopher had not been born yet when his parents started the business. But he and Kovalyk were two of only four chefs ever to cook in the Rigas kitchen. The other chefs were their father, Mike, and cousin, George Krabousanos, who died in February.

“We were taught by the best,” Kovalyk added regarding the cooking lessons she and Christopher received from their father.

Kovalyk said the family never sacrificed quality ingredients in the food they served to the people of the Ohio Valley for any reason. She said she refused to change brands because she wanted customers who enjoyed the food they were served to have the same experience every time they visited.

News of the closing came as a surprise to customers and neighboring businesses as well. Bill and Pat Rice opened a new business, Buffalo Creek Primitives & Country Decor, next door to the restaurant on Tuesday. Bill said they were leaving Rigas after an enjoyable meal a few weeks ago and noticed the adjacent building was available for lease. Having previously run a store under the same name in St. Clairsville, they decided to make another go of it, hoping to capitalize on the foot traffic coming and going from Rigas.

The Rices said they were sorry to hear that Rigas had closed. They said the restaurant owners were wonderful people and that their company in the neighborhood would be missed.