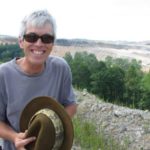 Photo Provided In this photo provided by Vivian Stockman of the Ohio Valley Environmental Coalition, Wheeling biologist Benjamin Stout, who died Friday, poses July 20, 2007, at the Hobet 21 mountaintop removal site. He, Stockman, Mary Ellen Cassidy of Wheeling and others were traveling with a film crew for a documentary, “The Last Mountain.”

Colleagues of biologist Benjamin Stout, who died Friday, are remembering him as an educator and environmental researcher who took science into the real world and became “a hero for West Virginia.”

Stout, 60, was a professor of biology at Wheeling Jesuit University, where he taught and conducted research for 26 years. A lifelong West Virginian, he was active in community and environmental projects throughout the state.

“He was one of the real giants of our community,” said Mary Ellen Cassidy, who taught at WJU for many years and worked with Stout on several grants. “He wasn’t one to ever make a big deal or seek accolades … I don’t think Wheeling at large really appreciated what he did on the local, regional and national level.”

Stout took students to central and southern West Virginia for water testing projects. He demonstrated “that science is not some abstract endeavor,” she said.

In his social justice work, “the science was never sacrificed,” said Cassidy. “He kept strictly to accepted protocols. He embraced complex systems and tried to figure them out.”

“His legacy is pretty immeasurable,” Keating said. “I truly believe that the work he conducted on water lines in Mingo County saved lives … You can’t measure the work of someone like Ben, in my mind.

“We haven’t seen the end of mountaintop removal,” she said. “Ben’s work was prophetic. He said water is more important than coal. I think he was right, especially if coal mining is not done in a way that protects the water.”

Cassidy said Stout was able to find grants and money to conduct environmental studies for low-income communities that lacked resources.

“Ben was able to communicate with them and let them understand we are all in this together,” she said.

“He had so much respect for the people in the communities,” she said. “He had really good relationships with people. He believed a lot in community collaborative research. He deeply believed in that.”

In Stout’s view, “people who live with issues are the real experts,” Keating said. “What his research did was confirm the fact there are pollutants in the water that are harmful.

“Another remarkable thing about Ben was he worked not only with his head, but with his heart,” she said. “Ben’s work was beneficial to a larger community. He wasn’t content to do just science. He wanted to make sure people in West Virginia had information and facts and could advocate at the Legislature. Both things came into being because of Ben.”

Vivian Stockman, vice director of the Ohio Valley Environmental Coalition, worked with Stout on a number of projects over the years.

In a blog post, she wrote: “We are filled with deep gratitude for his lifetime of work on behalf of the people and waters of West Virginia … We were so fortunate to have had Ben as a longtime ally of OVEC, and we are heartbroken at his passing.

“From mountaintop removal coal mining, to longwall coal mining, to coal sludge impoundments, to coal slurry injection, to coal fly ash impoundments, to the MCHM water crisis, to fracking activity and wastes, Ben was there, testing the waters, backing up what the people were saying with scientific evidence, and always genuinely caring for the health and safety of the people whose waters he tested,” said Stockman while recalling Stout’s efforts.

Known for his soft-spoken, earnest demeanor, Stout “was a very respectful, kind person,” Cassidy said. “He also had a great sense of humor … He loved to talk about his three sons.”

“This demeanor he had was so kind and caring and compassionate,” she said. “He let the facts speak for themselves.”