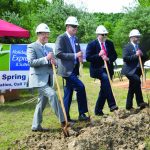 As Moundsville officials held a groundbreaking ceremony for the development of a nearly $17 million Holiday Inn Express & Suites Tuesday, they are hopeful it is the first of several future developments that have been years in the planning.

A five story, 123 room, Holiday Inn Express & Suites is the first of three phases, according to President of MPH Hotels Michael P. Holtz. He said they expect to begin construction on the Holiday Inn within days and expect to have it completed in 12 to 14 months.

“The next phase will be hopefully two to three restaurants up on the front parcel, and the idea there is, we want to be able to create a whole environment on this corner,” Holtz said.

Holtz said the hotel will be constructed on more than 2 acres at the rear of the property, which is situated just off WV 2 and near the Moundsville Bridge, an 11-acre parcel of property located between the Kroger plaza and Teletech Drive. He said there is addition to plans for a second hotel to be constructed at the site.

“You’re talking $40 to $45 million of investment on this now piece of vacant land for the City of Moundsville and the state of West Virginia,” Holtz said. He said in addition to hundreds of temporary construction jobs, they expect the entire development to create “200 to 250” permanent full-time jobs for the area.

“Hopefully that is something that will be greatly appreciated by the city and by the people who are looking for work here,” he added.

Holtz said it took many years to make this project come to fruition and he is extremely appreciative of all the assistance Moundsville officials, including Mayor Philip Remke and City Manager Rick Healy put forth to help make it a reality.

“This town has been incredible to work with and we really appreciate everything they’ve done,” said Holtz, a Shadyside native, who now resides in St. Petersburg, Florida.

He said the hotel will be a “good neighbor” and be very actively involved with community events. He said MPH Hotels currently has 16 hotels in four different states, with four currently under construction.

“The valley is still home and to prove it, we curently have about $100 million of hotel assets in this valley alone,” he added.

Healy, who welcomed a small crowd who gathered for the ceremony said, “What an exciting day it is for the City of Moundsville, MPH Hotels, and Marshall County. … I consider this to be a true honor to be standing here today to break ground for an exciting economic project in the city.” He said with the local expansion of the gas and travel industries more lodging is much needed.

“Our Mayor Phil Remke … was the driving force behind this project and I would like to thank him publicly for that,” Healy said. “Projects like this might happen regularly in larger areas, but here in Moundsville we don’t see things like this too often. We hope that will change. So our excitement is running high. It takes a lot of people to make things happen. It takes vision. It takes hard work. It takes teamwork, and that’s what we have in Moundsville … and when you add in a partner like MPH, you’re bound to see success.

“By adding a hotel in to a community it keeps travelers in your community. Moundsville is home to great tourist attractions and these places get visitors on a daily basis,” he added.

Remke, who served as a vital catalyst for the project, said the city of Moundsville has not seen a project of this magnitude in many years and he is extremely excited for the future growth of the community.

“A new future of Moundsville begins now. Today, the dark clouds are being lifted from our city. The past is in our rear view mirror and the future is very bright today,” he said. “With a lot of hard work and persistence today is an exciting day for unlocking the future for the city of Moundsville.”