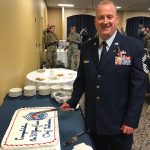 Air Force CM/Sgt. Patrick R. VanVranken prepares to cut a cake presented to him upon his announcement he will be retiring this fall. VanVranken was the inspiration for the Boatsie’s Boxes campaign during the Christmas season, benefiting servicemen and women stationed abroad.

CM/Sgt. Patrick R. VanVranken, the inspiration for the Boatsie’s Boxes Christmas-season campaign that has benefited tens of thousands of servicemen and women at posts abroad, is retiring from the Air Force.

VanVranken, the son of Jim and Gail “Boatsie” VanVranken of Wheeling, enlisted in October 1989 and will leave the Air Force this November.

At his retirement, he serves as maintenance superintendent of the 28th Munitions Squadron at Ellsworth Air Force Base in South Dakota.

In that post, he leads personnel responsible for providing safe, reliable munitions and armament systems for B-1 bombers.

VanVranken’s responsibility includes managing a 251-acre Munitions Storage Area in which $480 million worth of munitions, armament and equipment are stored. His work generated 59,967 sorties (individual missions) by Air Force planes.

He has served at bases in the United States, United Kingdom, Germany, Italy, South Korea and Japan.

It was more than 15 years ago that VanVranken mentioned to his parents that servicemen and women abroad often find themselves in need of basics and small treats ranging from candy to socks, DVDs to shaving cream. Mr. and Mrs. VanVranken began their Boatsie’s Boxes project, which quickly became a national campaign, to fill that need by sending Americans in the military boxes, then Christmas stockings, filled with the requested items.

Volunteers helping with the initiative — from all 50 states — often pack the stockings themselves. Last year, 2,000 of them came from the New Jersey Federation of Women’s Clubs. Many of the stockings had to be stuffed by the VanVrankens and Wheeling-area helpers.

Boatsie’s Boxes came to an end last Christmas season, with the VanVrankens declaring it was time for them to retire. Asked once why she began the endeavor, Mrs. VanVranken told a reporter, “It’s terribly important to remember those sacrificing so much for us, especially (during the Christmas season). When they are so far away from home, it boosts their morale — and it’s an easy thing to do.”