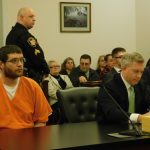 File photo The Seventh Appellate District Court of Appeals upheld the conviction of David Carl Kinney for the murder of Brad McGarry. Kinney is currently serving a sentence of life without the possibility of parole. Kinney is pictured with defense attorney Chris Gagin.

The Seventh Appellate District has upheld the conviction of David Carl Kinney for the May 2017 killing of Brad McGarry.

Kinney, 32, of Brilliant was sentenced February of 2018 by Belmont County Common Pleas Judge Frank Fregiato after an eight-day trial saw him found guilty of aggravated murder with firearm specification, earning a life sentence without the possibility of parole.

Kinney, who was married, was apparently romantically involved with McGarry, 43. Kinney originally had reported finding McGarry’s body during a visit to McGarry’s Bellaire home, accompanied by his wife and daughter on May 7. Suspicion fell on him during an interview May 9 with Belmont County Sheriff’s Chief Detective Ryan Allar, in which Kinney gave several contradictory stories. He finally admitted he had shot McGarry but claimed he did so in self-defense when McGarry produced a gun, which Kinney said was fatally fired in the course of a struggle.

This past April, Kinney’s attorney, Chris Gagin, challenged the proceedings and results on 10 grounds and argued them with Belmont County Chief Assistant Prosecutor Kevin Flanagan before Judges Carol Ann Robb, Gene Donofrio and David A. D’Apolito. On June 28, the appeals court released its decision upholding the judgment.

Gagin had argued that the prosecution had not established prior calculation and design on Kinney’s part. The court found that Kinney had sufficient time and opportunity for planning.

“Contrary to (Kinney’s) contention, the nature of the first shot (which entered from the back of the top of the scalp) does not require one to conclude there was a fight or a lack of pre-planning mere because it was not accurately aimed to penetrate the brain,” Robb stated in a written judgment. “Three hours after the shooting, he then went back to the house … bringing his wife and her child with him to discover the body and call the police. … During the interim, he did not seem shocked or nervous to his wife.”

The defense also challenged the forensic evidence, saying it did not match Kinney’s description during the interview of how he shot McGarry. The court referred to testimony from a Bureau of Criminal Investigations agent who said scene recreation from tissue trajectories might not be scientifically reliable in this case, since there were factors such as moving bodies.

“(Kinney) admitted to the shooting but did not confess to a planned event. Again, the jury was not required to believe the final story (Kinney) related to the police. Even that story placed him standing above an incapacitated victim who had been shot in the back/top of the head and firing a second, more centered, and fatal shot to the back of the victim’s head,” Robb said. “Jurors are free to believe some, all or none of the testimony of each witness, and they may separate the credible parts of the testimony from the incredible parts.”

The court also addressed the challenge that Kinney should have been read his Miranda warnings earlier in the interview, and that Kinney would have considered it a custodial interview and he was not free to leave.

“There was no objective indication that the non-custodial situation had turned custodial at this point. … The mere fact that the suspect made incriminating statements during the interview, leading to his eventual arrest, does not convert a non-custodial interview into one which is custodial,” Robb said. “A reasonable person would be hoping the detective believed the self-defense story, not thinking he was under arrest.”

The court also addressed the challenge that the confession was involuntary due to an intense, emotionally-draining interview, false statements by the detective about evidence discovered, and the possibility of the affair with McGarry being revealed, as well as Kinney saying he had a lack of sleep beforehand. The court noted that coercion is not alleged in the first hour of the interview, and Kinney appeared alert and cognizant.

“(Kinney) points to his sobbing as a factor showing his vulnerability to coercion, but the detective testified he was not crying as much as he tried to make it appear,” Robb said, going on to add that predictions about how others may interpret evidence are not threats.

The court also did not find elements of bias in jurors or Fregiato, as the defense challenged, or issue with the jury instructions. The other judges concurred with Robb’s statement.