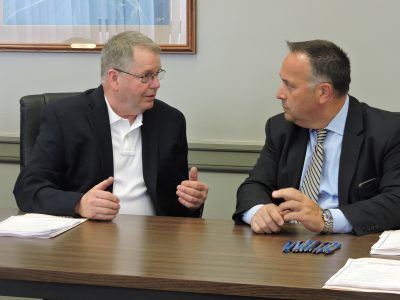 The Ohio County Development Authority has hired a Florida sports management business to oversee day-to-day activities at the county’s future sports complex at The Highlands.

Sports Facilities Management already manages a host of facilities across the country, including the Myrtle Beach Sports Center, and the Panama City Beach Complex.

Ohio County, meanwhile, retains ownership of the complex — including its parking lot, playing surfaces, sports equipment and all other hard assets associated with the facility, he said.

The costs for hiring Sports Facilities Management is still being finalized, according to Commissioner Randy Wharton, who serves as president of the OCDA.

He expects the company will hire employees, and the county will reimburse their payroll. County workers also will be responsible for maintenance at the facility.

Stewart showed OCDA board members a video presentation detailing the progress of construction at the sports complex.

The facility will have six basketball courts surrounding a central turf playing field. The field can be configured into four separate soccer fields if needed.

OCDA members voted to award a bid for painting within the facility to Karras Painting of Wheeling at a total cost of $525,000. The work is expected to take 180 days.

Zambito Flooring of Triadelphia also will be $112,236 to provide carpeting.

Both Karras and Zambito were the only contractors submitting bids for their respective jobs, according to Stewart. He said the county chose not to rebid the projects as the bids came in under budget, and both were local contractors.

Stewart announced the Xfinity Store at The Highlands will open Friday, while the Starbucks coffee shop starts business on Sept. 13.

Stewart said he also met with representatives from Menards earlier on Tuesday, and they have scheduled a pre-construction conference for Aug. 26.

The OCDA meeting began with a moment of silence for Tom Cerra, a board member who recently died. John Olejasz, marketing executive for Supermail, was appointed to the vacant seat.

Commissioners approved the hiring of Dr. Lisa Hrutkay to be the medical director for the county’s new ambulance service.

Dr. Matthew Wood also was appointed to a vacant seat on the Ohio County Board of Health.

The next Ohio County Commission meeting is scheduled for 6 p.m. on Sept. 3. The time and date for the next OCDA meeting will be announced.