ANDREW GRIMM For The Intelligencer 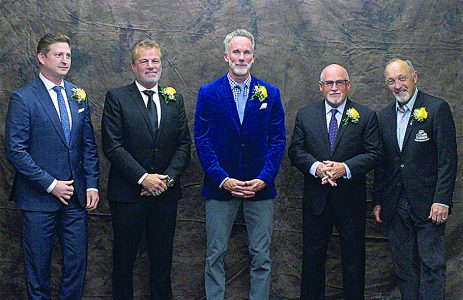 “It’s a terrific opportunity for the community and the university to come together and celebrate the accomplishments of local people,” University Executive Director of Community Relations Mike Florak said. “We have been doing this at Franciscan University for 52 years now, so it’s something I think that community looks forward to. It’s always a really fun night.”

“It was a great place to grow up as a kid. I hope that certainly kids in the future can have a hometown like I had. Whenever I can come back and help out, I’ll do it.”

The Penguins panel came together between Florak and Steigerwald.

“When I was working at Waynesburg University, Paul Steigerwald was doing a high school football show, so I would see him and talk to him a little bit. We’ve had the Steelers and the Pirates here and that kind of stuff, so I felt comfortable asking him if they would consider coming, and they came. We’ve been working on this for almost a year and a half and it came together.”

Steigerwald was happy to be involved.

“Mike Florak contacted me about a year ago and asked me if I would like to come down and bring some former Penguins with me for this dinner and I said, ‘Sure, let’s do it.’ We spent a lot of time e-mailing each other and getting ourselves prepared,” Steigerwald said. “I’m happy I was able to bring Colby Armstrong and Bryan Trottier, Phil Bourque was a last-minute addition, but if you’re in Pittsburgh you know (Bourque) comes to a lot of events so it’s great to have him here in Steubenville.”

For Bourque, who was added to the panel in the days leading up to the dinner, it’s about taking an opportunity to give back to the community.

The dinner honored former Catholic Central coach and Athletic Director Tom Korab, who coached Central to the 1971 state title; Gary Kessler, the owner of Steel Valley Tank; the Rev. Jason Elliot of the First Westminster Presbyterian Church in Steubenville, a Franciscan graduate who is involved in many programs around the area; and former Weir High football and baseball coach and current OVAC executive board member Dan Enich II, who is the director of the John D. Rockefeller Career Center and the director of career technical and adult education for Hancock County Schools.

“To have a night like true where we can all come together and celebrate the achievements of some great people, it’s a great thing.”