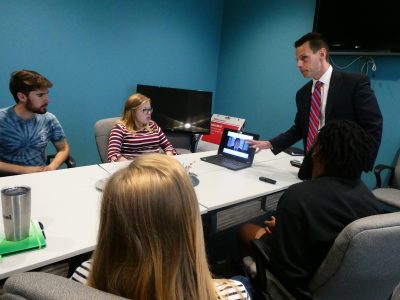 Sometimes a leader is someone with the courage to step forward and do a job when nobody else wants to do it.

State Sen. William Ihlenfeld, D-Ohio, delivered that message Thursday as the first guest lecturer in the “Leadership Education Program” series happening at Bethany College. About a dozen students showed up for his speech in the dining hall.

Teachers, coaches and pastors are among those in the position to inspire leadership, Ihlenfeld said.

“If you fall in to the category where you don’t think you are not a born leader, that doesn’t mean you’re not going to be one. It just means that you have some learning to do,” he said. “And I still learn everyday as far as how to become a leader.”

There are “reluctant leaders,” according to Ihlenfeld. These leaders are the people who stand up when circumstances warrant and there is no one else willing to do it.

“There are things thrust upon them,” he said. “They don’t raise their hand to volunteer in a particular situation. They are forced to lead because of circumstances beyond their control.”

Ihlenfeld said the first time he came in to a leadership position was when he was a broadcast journalism major at Ohio University Eastern, and had aspirations of being a sportscaster. He took over the job of sports director at the campus television station when nobody else wanted to do it.

Ihlenfeld later served as president of his fraternity. This was an unpopular position among his fraternity brothers as it meant he would be the one charged with enforcing the fraternity’s rules.

Years later, he would be appointed U.S. Attorney for the Northern District of West Virginia. This would put him in the position of defending West Virginia’s legal interests at the federal level, often against more powerful states like New York, he said.

Ihlenfeld also would be forced to show leadership on Oct. 20, 2013 when the Federal Building in Wheeling was hit with gunfire. That day, he was called upon to care for his employees, meet with regional media to provide information about the shooting, and work with both West Virginia and Ohio officials to obtain warrants and investigate the cause of the shooting.

Then in 2018, no Democrat filed by the deadline to run against then-Senate Majority Leader Ryan Ferns, R-Ohio. After the deadline, party officials asked Ihlenfeld to enter the race. He agreed to do it as he believed the races shouldn’t be uncontested, and he felt he could bring his experience to the office.

Ihlenfeld went on to win the election.

“To be a leader, you can’t step back — you have to step forward,” he told the students.