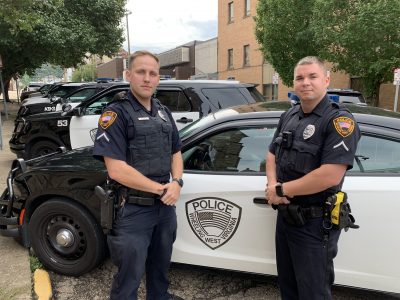 Two police officers have been officially certified as Drug Recognition Experts, the first within the Wheeling Police Department.

Officers Ryan Moore and Gage Parker took part in a rigorous curriculum over the summer, which includes 120 hours total for DRE school and an additional 40 hours of education for certification.

That process alone includes a five-part testing process, including several evaluations, and knowing how certain illegal drugs effect a person’s ability to function at a normal state.

Less than 10 people are accepted to participate in the annual course that takes place in Huntington and Phoenix. Currently, there are less than 50 DRE officers in West Virginia.

With their unique certification as DRE officers, Moore and Parker can be qualified as experts in court and give their opinions on what drug category a person has taken, based on the evaluation they are certified to administer on that person.

DRE are used while investigating vehicle crashes, DUI’s and other types of drug impairment cases. Skills learned included medical education, including a person’s pulse/blood pressure, temperature, measuring pupil sizes and most importantly, memorizing a drug matrix chart which provides information on the signs, symptoms and general indicators on multiple categories of drugs.

“The DRE program is impressive, with significant training involved,” Wheeling Police Chief Shawn Schwertfeger said. “This program can be used in a variety of ways that benefit the agency, our community and region. The program is yet another tool in our continuing battle with the areas drug problem.”

Moore has been with Wheeling police for the last four years, while Parker has been here for three. In addition to their patrol duties, both are part of the departments SWAT Team.

“The importance of the safety of our highways has always been a priority of mine and the skill set of these two dedicated officers will assist us in holding accountable those who choose to drive impaired,” Schwertfeger said.