W.Va. Justice Discusses ‘The Year That Was Not Awesome’ 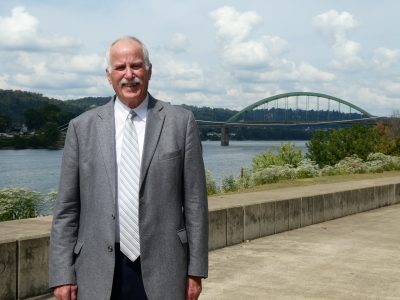 It was a year that saw two justices — Menis Ketchum and Robin Jean Davis — resign amid evidence of extreme overspending by the court. Chief Justice Allen Loughry would be convicted of seven counts of wire fraud, one count of mail fraud, one count of witness tampering and two counts of lying to the FBI. He was sentenced to prison earlier this year.

The result of all the upheaval is that for the first time, West Virginia voters will be electing three justices in 2020 — a majority of the five-person court.

Hutchison explained this to the Wheeling Rotary this week as he made stops in the Friendly City, gearing up for his own 2020 re-election campaign.

Hutchison is the newest member of the court — having been appointed in January to unexpired term of Loughry. That unexpired four-year term will be on the ballot next year.

Also on the ballot will be a full 12-year term for the seat currently occupied by Justice Tim Armstead, who won a special election last year to fill out Ketchum’s term. Next, voters will elect another candidate to a full term and a court seat currently held by Justice Margaret Workman.

All three justices seats will be elected in separate non-partisan races in the May 12, 2020 primary election.

Only two sitting justices will not be on the ballot in 2020. Chief Justice Beth Walker was elected in 2016, and her term extends through 2028.

Justice Evan Jenkins was elected in a special election last year to replace Davis, and will fill out the remaining six years on that term.

Current court justices are interested in getting out “into the public realm,” according to Hutchison. That was something that wasn’t done during the “years that were not fabulous” for the court, he said.

“They didn’t do that,” he said. “They apparently locked themselves up on the third floor of West Wing of the Capitol, and that’s where they stayed.

“We are trying as hard as we can to get out and do some education, do some outreach.”

The chaos and talk of impeachment of Supreme Court justices last year was “devastating to the judiciary,” according to Hutchison.

“By that I mean not just to the 75 circuit court judges and 47 family court judges, and 158 magistrates, but also to the 1,500 employees of the judicial system throughout the state,” he said. “That process devastated the morale.

What has happened following “the year that was not awesome” is that justices are seeking to rebuild trust in the court by increasing transparency so people “know what’s going on,” Hutchison said.