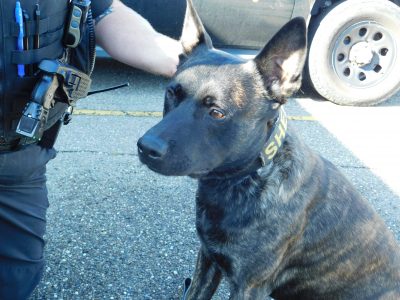 K-9 Officer Tuco and his partner and handler, Deputy Chad Kulpa of the Belmont County Sheriff’s Department, are asking the public to go online and vote. Tuco is a finalist to win a new K-9 police SUV.

ST. CLAIRSVILLE – K-9 Officer Tuco and his partner and handler, Deputy Chad Kulpa of the Belmont County Sheriff’s Department, are asking for help and online votes online through October, as Tuco competes with other K-9 officers in a nationwide contest for a new SUV K-9 patrol vehicle worth up to $50,000.

Tuco has been named one of 30 finalists in the Vested Interest in K-9 Law Enforcement Sports Utility Vehicle Giveaway. The public may vote once per day on the charity’s contest page. Votes are being accepted now through 7:59:59 a.m. Oct. 31. The K-9 and handler team with the most votes by the end of the contest wins.

Kulpa said there is no way to tell which dog is in the lead.

“They keep a daily count, but they’re not telling us what the count is, so whoever has the most votes is going to be a surprise at the end,” he said.

He said while Vested Interest allowed him to post one picture, the sheriff’s office Facebook page is featuring pictures and videos of Tuco every day at www.facebook.com/Belmont-County-Sheriffs-Office-207124752709755/.

Visitors to the site can watch training videos, candid or humorous videos or pictures, and novelty manipulations. Kulpa said this has been an opportunity to introduce Tuco to the county.

Tuco, a 3-year-old Dutch Shepherd who has been with the department for two years, is a bomb-detecting dog and is often utilized during threats and visits by officials.

“He’s been all over the valley, actually,” Kulpa said.

Tuco has been as far as Caldwell, Ohio, during school bomb threats, as well as at a natural gas plant in Marshall County during a bomb threat. He was deployed during local visits by President Donald Trump and Vice President Mike Pence for bomb sweeps.

“We’ve done numerous schools across the valley,” Kulpa said. “We help out the whole Ohio Valley. … We really hope the valley can come behind us and help vote for this vehicle. He deserves it. Our current vehicle has high mileage. It never shuts off during the day, period, so it gets wear and tear. Since we travel all over the valley with bomb threats and stuff, Tuco needs a new vehicle to get from point A to point B.”

“He hasn’t found a bomb yet, thank God,” Kulpa said. “If Tuco finds something … it’s going to be something big to do a lot of damage. On these sweeps, you’re on high alert.”

Vested Interest in K-9s Inc. is a charity located in East Taunton, Massachusetts. Their mission is to provide bulletproof and stab protective vests and other assistance to dogs of law enforcement and related agencies throughout the county.

To vote, go to www.vik9s.org/suvgiveaway.