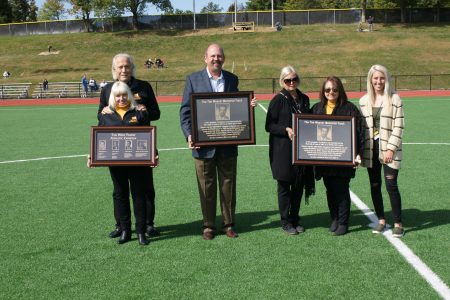 “We are grateful to our friend and major donor Gary and Flip West, who together with donors David and Ann Coffaro, made this dream a reality. Our students benefit tremendously through their generosity and we look forward to many, many athletic competitions and practices here in this outstanding facility. It is a perfect addition to the Hilltop,” university President Stephen Greiner said.

Sunday’s event honored the largest donors in university history, Gary E. and Flip West, who made a $1 million lead contribution to help fund the new facility — which is located along Faculty Drive, just past the Campbell Hall of Health Sciences.

Scheduled in conjunction with the Hilltoppers’ men’s and women’s soccer doubleheader against Charleston, the dedication also honored former WLU track and cross country coach Tim Weaver. Donors David K. and Ann Coffaro made a major contribution to the project in Weaver’s memory.

The newest member of West Liberty’s athletic facilities lineup made its debut this fall as the state-of-the-art home for WLU’s men’s and women’s soccer, track and cross-country squads. Featuring a fully lighted artificial turf soccer field surrounded by a full eight-lane, all-weather track built to NCAA specifications, the sparkling green jewel immediately took its place among the top multi-purpose venues in the region.

With the addition of the West Family Athletic Complex and Tim Weaver Memorial Track, the Hilltopper track teams now have the ability to practice and host meets on campus. The men’s and women’s soccer teams have already taken advantage of their new-found flexibility by scheduling multiple night matches, greatly reducing missed class times for the student-athletes.

The event got under way with a private donor VIP event, beginning at 11:30 a.m. The public dedication ceremony for the new complex took place at 12:30 p.m. with the soccer doubleheader following.