Motorists Should Beware Of Deer During Rut Season 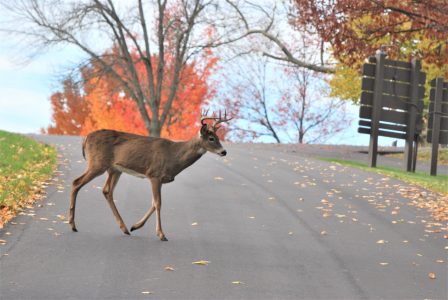 MARTINS FERRY – While many people are gearing up for Halloween this month, there is another season picking up steam that can be just as frightful for motorists — the deer rut.

The rut is when male deer are attempting to mate with female deer, which often leads to the animals running into roadways and becoming a hazard to drivers, according to the Ohio Department of Natural Resources.

This, combined, with deer hunting season driving the animals out of the woods can prove hazardous to drivers. According to a new study by State Farm, thousands of animals, including deer, collide or fly into vehicles every year.

State Farm says “Ohio drivers have a 1 in 102 chance of having an insurance claim involving a collision with an animal.” Ohio also ranked No. 23 in State Farm’s study regarding animal collisions.

In neighboring West Virginia, “drivers have a 1 in 38 chance of having an insurance claim involving a collision with an animal.” West Virginia has ranked No. 1 in the study for the past 13 years.

Ohio State Highway Patrol Sgt. Brian McFarland said he has responded to deer-related crashes and has been in some himself in the past. In one crash, the deer scraped the side of his vehicle, he said.

“I saw it coming — there was nothing I could do,” he noted.

McFarland said in his St. Clairsville Post’s area deer crashes happen on every road including the interstates. They typically occur between October and early March. Between October and December is the heaviest time of year for such crashes, he said.

“There is no special time of day. Usually early evening to early morning … because of the dark and people not seeing the deer,” McFarland said.

“We have a fair amount of collisions on the interstate with deer. When they want to cross the road to reach the other side there is no stopping them,” he added.

McFarland said the best thing a motorist can do during the season is be aware of their surroundings while driving. He said if a motorist sees a deer they should not try to swerve to miss it. Instead they should hit the brakes.

“Usually there are more than one. They come in a pack of two or three. Don’t try to avoid it because you might hit a car traveling in the opposite direction,” McFarland said. “It’s easier said than done, but try to come to a stop to create minimal damage. Slow down and be alert.”

Some more tips offered by State Farm include:

Stay Alert: Pay attention to “deer crossing” and other road signs and be cautious in areas near woods or water.

Use High Beams: Flicking your high beams on a deer in the road may cause the animal to scurry away. High beams also help illuminate dark roads.

Brake as Necessary: If you can avoid hitting the animal, reduce your speed, honk your horn and tap your brakes to warn other drivers. If there are no drivers behind you, brake hard.

Remember Meal Time: Watch for animals in or near roads between dusk and dawn.