Mystery Vacation in W.Va. Becomes Fall Trip of a Lifetime 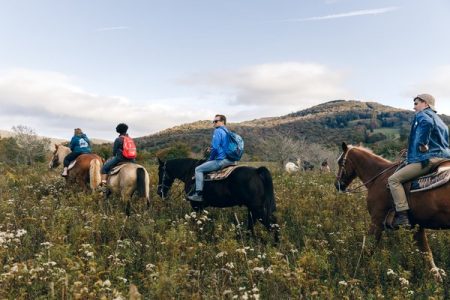 Photos provided Thirty-three tourists from Washington, D.C., took a surprise trip to West Virginia recently and were treated to a view of the Canaan Valley between two of the highest ridges in the Allegheny Mountains

DAVIS, W.Va. — Thirty-three passengers boarded a bus on a recent Saturday morning at Washington, D.C.’s Union Station for a weekend trip. But this was no ordinary excursion: None of them knew where they were going, and most didn’t know their fellow travelers.

It may sound like the premise for a reality TV show, but blind vacations-trips where the destination stays under wraps until the participants arrive-are a fast-growing travel trend. Solo travel, where adventurers embark on journeys without friends or family in tow, are also gaining traction among younger travelers.

As the bus made its way out of the nation’s capital, the passengers tried to guess where they were headed. A little under three hours later — and 3,000 feet above D.C.’s elevation, they got their answer: West Virginia.

Passengers were greeted by a postcard-worthy view of the 13-mile Canaan Valley between two of the highest ridges in the Allegheny Mountains just as the area’s renowned fall foliage season kicked off.

“We were looking for a unique way to get people excited about fall in West Virginia,” said Chelsea Ruby, the director of the state’s tourism office. “Our fall foliage is second to none, and our mountain towns are marvelous hosts, but a lot of travelers still don’t think of us as a fall destination. This event lets us cut through the noise of everyday advertising and get our message out: Come see West Virginia this fall!”

Their instructions: Show up at 7 a.m. with layered clothing, hiking boots and a sense of adventure. The mystery destination would take care of the rest.

After lunch, travelers chose between a horseback ride through the mountains and a challenging hike with rewarding views. The hikers took on Seneca Rocks, a spectacular formation in the Monongahela National Forest that rises nearly 900 feet from the valley floor to form one of the eastern United States’ premier rock-climbing destinations.

The next stop on the mystery trip agenda was dinner and night-life in the twin towns of Davis and Thomas.

Sirianni’s Pizza in Davis serves up world-class thin-crust pies with brews from Stumptown Ales, located just up the block. Hellbender Burritos across the street offers massive burritos, including a generous list of vegetarian options.

Both were packed Saturday evening, with the mystery-trippers squeezing in between throngs of tourists and locals enjoying highland dining at its best.

“One of my favorite things about the trip was getting to meet a lot of great locals,” said Destination Unknown participant Albert Ting. “My impressions of West Virginia have certainly changed. There’s so much this state has to offer in terms of food, culture and exploring nature. If there’s anything on your bucket list for vacation, West Virginia will definitely deliver.”

The night ended in Thomas at the Purple Fiddle, a general store turned cafe and concert venue, where Americana mainstay Driftwood stopped by for a sold-out show.

Then it was off to Canaan Valley Resort, a recently renovated 160-room resort that is a favorite among leaf peepers in the fall and skiers in the winter.

Day two began with sunrise yoga followed by a hearty mountain breakfast at the resort. Then it was time to board the bus for the next adventure: a via ferrata.

The term via ferrata refers to a climbing route with fixed anchors on the side of a cliff, usually found in Europe. West Virginia’s NROCKS Outdoor Adventures is home to one the few in the United States and features a suspension bridge that allows climbers to cross between two the fins of Tuscarora quartzite that create the iconic rock formation.

It was a heady feat, and many participants elected to hike up and look on in awe while the thrill-seekers crossed between the fins. The experience and views were unforgettable for all.

The bus made one final stop before returning to Washington in Wardensville, just inside the border with Virginia. The Lost River Trading Post and Wardensville Garden Market gave the tired and happy travelers one last dose of mountain charm before heading back to the city.

“I’ve always been a drive-through kind of girl, never stopped and stayed, so this has been a great experience,” Destination Unknown participant Kristen Smith said. “To stop, stay and see the beauty you don’t get on the highway has been a new adventure for me. I can’t wait to go home and tell friends and family that this is where we need to go next.”

The two jam-packed days offered just a sample of West Virginia in autumn, to the surprise and delight of the participants. Although it took less than three hours to make the journey from Washington, the sweeping mountainsides and country roads gave a feeling of being far away in a world that’s truly almost heaven.