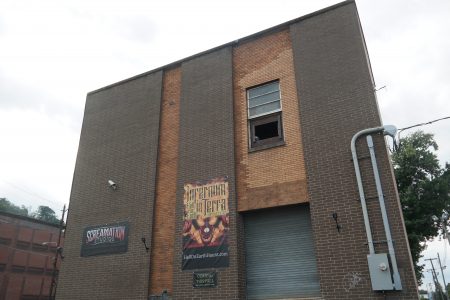 WHEELING — As Halloween creeps closer, a new haunted house in Wheeling is offering scares that tell a story.

“Everything’s going crazy in there, everything’s on fire in here,” Sean Cooley said inside one of the 38 rooms of his South Wheeling haunted house, Infernum in Terra. “The lights make it look like it’s on fire, and it sounds like fire is crackling. It’s a pretty immersive show, but we’re trying to tell a story from beginning to end.”

Visitors at Infernum in Terra begin their “story” as construction workers going through an orientation. From there, things take a dark turn as they encounter skeletons, demons, corpses, creepy dolls and much more.

Notably, many of the detailed masks and props within Infernum in Terra were made by Cooley himself. Several years ago, he began teaching himself how to make masks by hand through YouTube videos, later gained professional training and in 2015 launched a business for it, Screamation Studios.

“I always liked it and always made things for my own use, for my yard,” Cooley said of making Halloween items.

“Everybody was like you ‘should look into doing all this yourself.’ So I started researching classes, how to get into the industry.”

Cooley purchased the South Wheeling building, a former tobacco warehouse that previously sat empty for eight years, in January with the hope of showing off his creations while running a haunted house of his own.

Walking through Infernum on Terra, visitors encounter dozens of pneumatic scares, or props hooked up to machinery that “jump” at passersby, as well as actors that are part of the story. Rooms feature different lights and sounds, with some containing smoke, lasers and even live animals.

“Everybody comes out and has a great time. Everybody loves it,” Cooley said.

Cooley, who grew up in Mozart, said his interest in Halloween and horror likely stemmed from his childhood.

“I’ve always loved Halloween ever since I was a kid,” he said. “It’s probably my parents’ fault because they used to decorate their house. One time we ended up on the news. We put a coffin out front, with ghosts hanging from the trees, and we made our own tombstones. It was awesome.”

“I remember going down to the Victoria Theater one time and they had a haunted house there. It was awesome, and there was a line down the street. It was a big pull for the city because nobody else had anything like that,” he said.

Infernum in Terra offers shows every Friday, Saturday and Sunday through Halloween. Its box office opens at 6:30 p.m., the show starts at 7 p.m., and the box office closes at 10:30 p.m. depending on crowd size.

In the future, Cooley hopes to hold shows for holidays such as Christmas, Saint Patrick’s Day, and the Fourth of July with new stories and themes.

“The way we’re going to design it, it’s going to be pretty neat,” he said.

Cooley also plans to educate people on how to make their own macabre props and masks.

“People used to be so secretive, but now everybody shares their knowledge. That’s what I want to do, eventually,” he said. “I want to have things called ‘make and take’ where I bring people in and they can take a two- to three-day course, learn how to cast a mask, how to paint it.”

Those seeking more information on Infernum in Terra can visit hellonearthhaunt.com or call 833-428-6837.