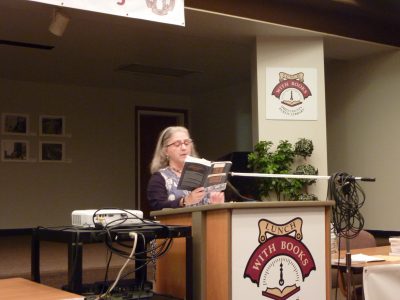 Speaking Tuesday at the Ohio County Public Library, author Meredith Sue Willis reads from her new novel, “Their Houses.” The West Virginia native also spoke at the library in March 2008.

WHEELING – Author Meredith Sue Willis returned to Wheeling Tuesday to read from her new novel, “Their Houses,” which includes a subplot based on an actual incident in her native West Virginia.

Willis, the author of 22 books, spoke about the importance of fiction at the Ohio County Public Library’s Lunch With Books series. She also spoke at the library in March 2008.

Her latest novel was published by West Virginia University Press. She read portions of “Their Houses,” introducing a fictional character who became a lay preacher after serving a prison term for his role in a 1990s plot by the Mountain Militia to blow up the FBI fingerprint facility in Harrison County, West Virginia, not far from Willis’ hometown of Shinnston.

West Virginia Poet Laureate Marc Harshman of Wheeling introduced Willis, describing her as “a marvelous writer” and “one of America’s finest writers.”

The plot of “Their Houses” wasn’t influenced by the current political-social climate.

“I worked on this book for a long time,” Willis said.

Current events don’t figure into her work, she explained, because she writes over a period of 30, 20 or 10 years.

Her imaginative work is inspired “almost always by a face I once saw or a person I once knew peripherally,” she said.

“I also use my fiction as rhetoric” to convince people of something important,” she added.

“The best fiction always does more than one thing,” the novelist said. “For me, as a writer, the reasons I write are pretty close to the reasons I read.”

Observing that “the best fiction is an ethical project,” Willis thinks one of fiction’s greatest contributions is “helping us understand people who are unlike us.”

Willis, who teaches novel writing at New York University, said, “West Virginia has a really rich culture of writers. … There is something welcoming about the writing world of West Virginia.”

After graduating from Shinnston High School, Willis attended Bucknell University for two years before dropping out to serve as a VISTA volunteer in Norfolk, Virginia, for a year. She then enrolled in Barnard College, where she completed undergraduate studies.

She also earned a Master of Fine Arts degree from Columbia University.