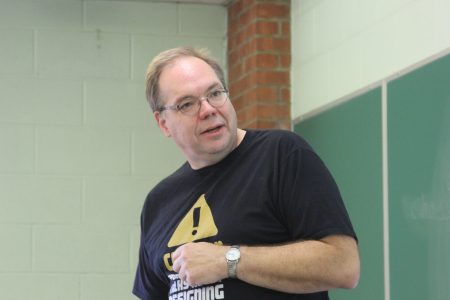 BETHANY – The Bethany College Board Game Creator Seminar has a public event set for 10 a.m. to 5 p.m. Saturday at Bethany Memorial Church on Main Street.

Recently, the seminar welcomed board game creator Charlie Hoopes to discuss some of the obstacles that arise between developing an idea for a game and getting a contract.

His lecture, “Same Game, Different Theme,” drew more than two dozen students and faculty. After the lecture, students joined Hoopes in the Ogden Dining Hall to playtest one of his prototypes.

“What I’m always looking for is something that hasn’t quite been done before,” Hoopes said, noting that 3,000 to 5,000 new games were published last year.

“It’s fun to put a game in front of people, and (have them) want to play it,” Hoopes said.

He used Sweet Success and Lands of Oz as examples of how an idea can evolve several times before fruition. In both cases, the theme changed multiple times, while the mechanics remained the same.

The publisher suggested Sweet Success, which uses a baking theme. The game is expected to advance to Kickstarter campaign next year.

Lands of Oz evolved from an idea called Lady of the Diamonds. In that case, Escape Velocity Game requested a theme of a classic piece of literature available in the public domain. Because the game played well with young children, Hoopes said he landed on “The Wonderful Wizard of Oz.”

Hoopes, who wore a T-shirt that read “Caution: Spontaneously Talks about Designing Board Games,” described his passion as designing family-friendly games. In fact, he said, his wife and sons give him feedback early on in his game creation.

“Being a game designer is not my way to make lots of money,” Hoopes said. “This is what I do for fun. This is what I choose to do on the weekends.”