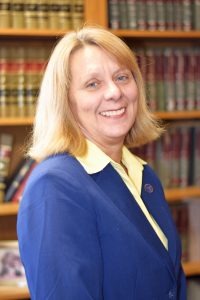 MORGANTOWN — Each year, West Virginia University honors its “Most Loyals” during Mountaineer Week.

On Saturday, during halftime of the WVU-Texas Tech football game, Marshall County resident and admitted WVU super fan Rhonda Wade got the call.

West Virginia University named Wade, who serves as Marshall County prosecutor, its “Most Loyal Alumni” during the 72nd Mountaineer Week.

After graduating from WVU’s College of Law, Wade become the first female prosecutor in Marshall County and was part of the county’s first drug task force.

While working as a public servant, Wade raised two daughters who never missed a home football game and eventually became WVU students themselves.

Other “Most Loyal” honorees from Saturday were Robert “Bob” and Dorthea “Tia” McMillan, Most Loyal West Virginians; Kevin Berry, Most Loyal Faculty/Professional Staff; and Debbie Koon-Friel, Most Loyal Staff Mountaineer.

Bob McMillan, who served in the U.S. Navy from 1965-69, was also a member and trustee of the University System of West Virginia, WVU Foundation Board of Directors and Shepherd University Board of Governors.

Kevin Berry, chief operating officer of the WVU Alumni Association, has served the university in a variety of ways for more than 24 years.

Debbie Koon-Friel, an administrative assistant the Eberly College of Arts and Sciences, has served as the informal advisor to the Student Association of Public Administrators and been a key connection to generations of students who have graduated from the public administration program.