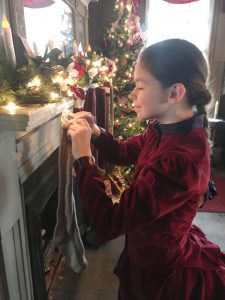 Josie Henthorn of Moundsville will be portraying a young Irena Cockayne Shaw at the Christmas with the Cockaynes Open House.

GLEN DALE – The Marshall County Historical Society is inviting the public to come experience Christmas through the eyes of the Cockayne children and immerse themselves in the traditions of Christmas during two separate holiday events at the Cockayne Farmstead in Glen Dale this month.

Often described as “frozen in time,” Cockayne Farmstead will let people step into the past at its Christmas with the Cockaynes Open House from 7-8:30 p.m. Thursday.

Home to the Cockayne family from 1850 to 2001, the farmstead saw over 150 Christmases. The tour, which endeavors to capture the full breadth of the farmstead’s history, will provide snapshots of four of those Christmases with a uniquely personal focus.

As visitors stroll through the farmhouse decked for the holidays, they will be led by young interpreters dressed in period clothing representing the four generations of Cockayne children who called the farmstead home. They will be introduced to Mary Cockayne, a 14-year-old girl in 1820 who lived through the early days of what would become Moundsville and experienced its rapid growth.

Guests will then have the opportunity to sit down to dinner in 1857 with Samuel A.J. Cockayne, who grew up to be an accomplished breeder of Merino sheep and brought international renown to Marshall County. Next, they will experience Christmas in 1884 with Samuel’s daughters, Dora and Irena, both talented musicians and artists who moved within the highest social circles in Moundsville.

Finally, visitors will hear from a young Sam Cockayne, an aspiring farmer who would become the last member of the family to inhabit the dwelling, and whose decision to live in the past resulted in the farmhouse surviving as the time capsule that it still remains. As each of these four generations presents the Christmas customs of their time and the story of their family, visitors will be taken on a personal tour through time that spans over 100 years.

Tours will be offered continuously throughout the open house, and cost $5 for adults, $3 for children 5-10 years old and free for children under 5. Refreshments will also be provided in the Visitor Center.

Later in December, the farmstead will also host two showings of a Christmas Concert featuring local musicians Zac Gordon and Jariel Henthorn, together known as Faire May. The talented duo will be performing selections of historical music that come directly from the farmstead’s collection and may have been performed by the Cockaynes themselves.

Each of Samuel A.J. Cockayne’s five daughters was skilled in several musical instruments, between them playing banjo, mandolin, flute, violin, guitar and piano. They often put on concerts for their neighbors, friends and family and left behind a large collection of sheet music and performance programs. In addition to bringing some of these historical pieces back to life again in the very spaces where they may have originally been performed, Faire May will also present many traditional Christmas favorites, incorporating numerous acoustic instruments.

Because of the limited nature of seating in the farmhouse, there will be two performances of this musical event on Dec. 15. There will be a 3 p.m. performance and a 8 p.m. candlelight show. In between, the farmstead will revive another tradition that was received with much excitement last year and will be going caroling through the neighborhood beginning at 6:30 pm in the Visitor Center. Tickets for the concert are $15 ($10 for members of the Marshall County Historical Society), and can be purchased by calling (304) 845-1411.

Both of these events at the farmstead have been planned and sponsored by the Marshall County Historical Society and the Preservation Alliance of West Virginia’s Preserve WV AmeriCorps, an historic preservation program funded by Volunteer WV and the Commission for National and Community Service. For more information on either of these events, please visit www.cockaynefarmstead.com or search Cockayne at Glen Dale on Facebook.