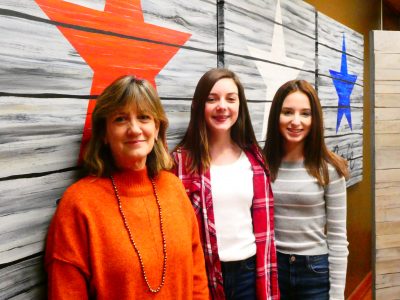 Two Wheeling Middle School astronomy students reached for the stars two years ago to learn about pulsars, and this month they presented the results of their research to the world’s scientific community in Honolulu.

Today, Josie Long is a sophomore at Wheeling Park High School, and her cousin Brooke Sikole is a freshman. The pair spent the past two summers researching pulsars at the Green Bank Observatory in Green Bank, Pocahontas County, following the encouragement of the former middle school teacher, Debbie McKay.

A pulsar is a highly magnetized rotating neutron star that emits beams of electromagnetic radiation out of its magnetic poles.

The students and their teacher participated in the Pulsar Search Collaboratory program that allows high school students and teachers to analyze pulsar data from the Green Bank Telescope. Their research has centered on determining the age of pulsars based on their spin periods.

Their efforts resulted in the three being invited to present at the 2020 American Astronomical Society Conference this month in Honolulu. Among those present to see their presentation were top scientists in the world, including some Nobel Prize winners.

Long and Sikole — then just seventh and eighth grade students — were immediately interested in the research opportunities offered at Green Bank when first told about them by McKay.

But they also admitted to at first not knowing what a pulsar was, and being a little overwhelmed at the prospect of doing the research.

“We heard of the opportunity, and we thought, ‘Can we do that?'” Long said. “We wondered how we were going to do it. And then Miss McKay said we are going.”

The team began work on a proposed project, and was accepted into Green Bank’s program.

They soon realized the work involved required more than just four months of research. Sikole estimates it will take about two more years to have conclusive results, and she expects she, Long and McKay will continue to go to Green Bank each year while she is in high school.

That is fine with McKay.

“This has been a very nice, long-term relationship, spending two summers at the Green Bank with them, and working along scientists,” McKay said. “I’m very proud of them.”

After receiving their invitation to present an abstract at the AAS Conference in the fall, the students and McKay began meeting after school in McKay’s classroom at WMS to craft their presentation. Their work continued right through the recent Christmas break.

The AAS Conference took place in Honolulu Jan. 4-8, with scientific discoveries being announced each day.

The students are grateful to McKay, their teacher.

“Without her, I probably still wouldn’t know what a pulsar is,” Sikole said.

McKay said a lot of people don’t know what pulsars are, as they are part of “a fairly new science.”

“I’m just so proud of them. They will forever be special,” she said of her students. “I hope they learn if you want to pursue something, why not. You really can reach your dreams.”