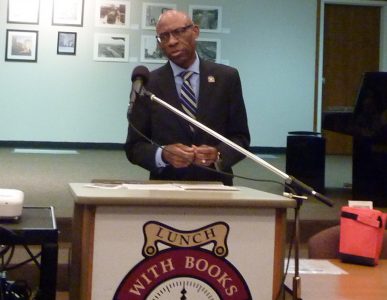 Trotter, who grew up in McDowell County, said it was “an extraordinary honor” to be the first lecturer “in part because I am a West Virginian.”

Trotter, a professor of history and social justice at Carnegie Mellon University in Pittsburgh, shared insights from his 2019 book, “Workers on Arrival: Black Labor in the Making of America.”

The main point of his research showed that “black people were contributors and producers, not just consumers” in the American economy. Over the past 400 years, black workers carried out important services under pressure and duress, but also found time to build their own metropolis, he said.

African Americans are part of a larger American working class, but also are part of one that has its own distinctive character, he said.

The historian challenged a white perception “that black people have a poor work ethic.” He said he wanted his book to counter stereotypes of black people as consumers, liabilities and takers, rather than producers, assets and givers.

Black people have been “key and indispensable assets in the growth and development of the United States,” he said, adding, “Free people of color played a major role in building cities.”

In the nation’s early years, black people worked as skilled craftsmen and artisans. However, nearly four million European immigrants who arrived between the end of the Revolutionary War and the start of the Civil War took jobs from African American artisans.

After the Civil War and into the 20th century, black workers contributed to the building of America as an urban and industrial nation, he said.

“One of the big takeaways from the book is a better understanding how African American labor played a critical role in pre-industrial America and industrial America in the late 19th and 20th centuries,” Trotter said.

When the Ku Klux Klan reinvented itself as an urban movement and attacked black communities, “African Americans contributed to the wealth of the nation and the power of the nation against the backdrop of racial violence and bloodshed,” he said.

“Even as black people helped to build predominately white cities, they at the same time also built their own black metropolis,” he said.

As examples, he cited an energetic church building movement, the establishment of fraternal and mutual aid organizations, and the formation of businesses.

“We’ve got to pay more attention to ordinary working-class black people,” he said.

“We need to recover the energy of these working people. … They had an impact in the urban landscape.”

Citing an African American entreprenuerial spirit to build businesses, he said, “Black people have always had a kind of flexibility about how they’re going to survive as black people.”