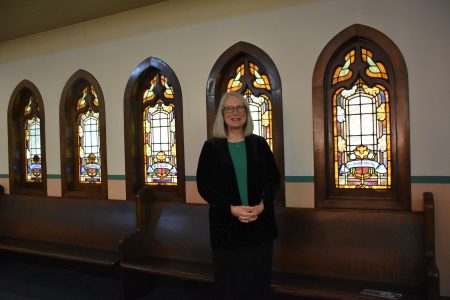 The Rev. Sharon Watkins stands in the sanctuary at Bethany Memorial Church.

Founder’s Day at Bethany College is observed on the first Thursday of March. This year’s event is 11 a.m. March 5 in Commencement Hall.

Watkins previously held the office of general minister and president of the Christian Church (Disciples of Christ) in the United States and Canada. Upon her election in 2005, she was the first female head of a mainline denomination.

She also has served as director of the Truth and Racial Justice Initiative of the National Council of Churches and interim minister of First Christian Church in Weirton. She is a member of the board of Christian Theological Seminary in Indianapolis.

She served on President Barack Obama’s Council on Faith-Based and Neighborhood Partnerships, and preached the sermon at the National Prayer Service after Obama’s first inauguration.

Watkins holds a doctor of ministry degree from Phillips Theological Seminary, a master of divinity from the Yale Divinity School, and a bachelor’s degree in French and economics from Butler University.

Her first ministry was to the Church of Christ in Congo, then known as Zaire. She has also pastored congregations in Connecticut, Indiana, and Oklahoma, and is the author of “Whole: A Call for Unity in Our Fragmented World.”

He also was one of the principal founders of the Christian Church (Disciples of Christ).