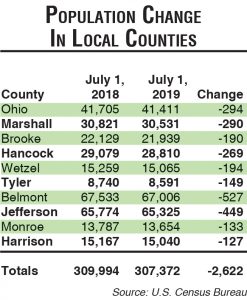 WHEELING – The Upper Ohio Valley continues to lose residents, as the latest population estimates from the U.S. Census Bureau show 2,622 fewer residents as of July 1, 2019, when compared to the previous year.

The estimates, released today for counties across the nation, show all 10 counties that comprise the Upper Ohio Valley — Ohio, Marshall, Wetzel, Tyler, Brooke and Hancock in West Virginia and Belmont, Jefferson, Harrison and Monroe in Ohio — on a continuing trend in population decline that has now spanned multiple decades.

West Virginia saw only one county with any growth in the year-to-year estimates — Berkeley County, which saw its population rise from 117,236 to 119,171. Jefferson County essentially stayed even in the estimates, as did Monongalia County

The figures released today will be the last county-level estimates before the full 2020 Census release next year.