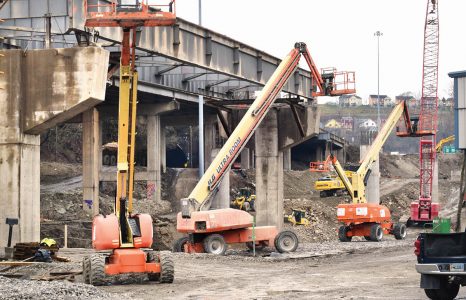 A work site beneath the I-70 bridges along a section of Fulton Street in Wheeling was idle Tuesday.

WHEELING – Swank Construction is “idling” construction on the I-70 Bridges Project for the next two weeks out of precaution for their employees’ health and well-being, West Virginia Division of Highways District 6 Engineer Tony Clark said.

Construction zones that stretch throughout the project area in Ohio County between the Marion Street interchange in Bridgeport and Elm Grove were eerily quiet Tuesday afternoon, including a work site beneath the I-70 bridges along a section of Fulton Street that typically is bustling with activity.

“I just received confirmation that Swank is idling operations on I-70 for two weeks,” Clark said.

He said DOH officials were notified that the idling procedures went into effect as of Monday afternoon. He said Swank currently has 100 employees working on the ground in close proximity of each other, with 50 of those employees who are staying in one local hotel. He said they took this action on their own accord out of caution.

“That’s the information that we received. … They are doing this on their own accord,” Clark explained. He said there are additional sub-contractors working with Swank on the project as well.

As of Tuesday afternoon, Clark said as an agency, the West Virginia DOH was still working, but officials continue to monitor and evaluate what they are going to do as an agency.

Shortly after general contractor Swank Construction was awarded the $215 million project late last summer, they immediately began site preparation in many areas around the city. The project includes the rehabilitation or replacement of 26 bridges on I-70 in Ohio County over more than a two-year construction schedule, with the full replacement of the two of the I-70 Fulton Bridges that span Wheeling Creek.