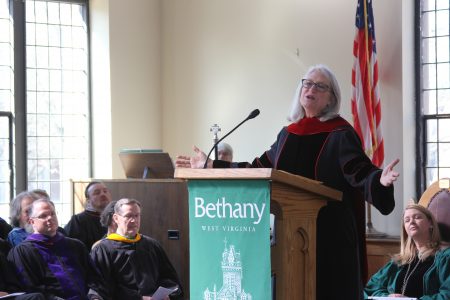 In an address titled “Alexander Campbell’s Problem,” the Rev. Dr. Sharon Watkins, the new pastor at Bethany Memorial Church and former president of the Christian Church (Disciples of Christ) in the United States and Canada, compared the polarization of Campbell’s time to that of today.

“Polarization in our time is seen around racial justice, immigration, reproductive choice, LBGTQIA rights and inclusion, health care, tax policy, gun violence, and climate change,” Watkins said during the ceremony Thursday. “And once you declare yourself on any one of those issues, you can basically tell where you stand on all of the others.”

That polarization, she said, is spotlighted in the upcoming 2020 election.

Campbell, who lived from 1788 to 1866 and was one of the principal founders of the DOC, dreamed of creating a united Christianity in time when an intensely divided United States was split on the issue of slavery and moving toward the Civil War. Campbell declared himself anti-slavery until he wavered when it threatened to divide his movement.

Campbell failed at his attempt at unity, she said, but his vision shouldn’t end there.

“Unity with justice is a worthy vision and goal, but we’re not there yet,” Watkins said. “And Alexander Campbell’s problem is still our problem.”

To overcome polarization, we need to examine our heads, our hearts, and our actions, Watkins said, citing Jewish philosopher Martin Buber.

“Buber did not say, ‘meet in the middle,'” Watkins said. “This is not simple arithmetic. He did not say abandon what is right to achieve a false sense of unity. Rather he gave thoughtful steps necessary to get out of our rhetorical foxholes and get into genuine dialog and debate on a shared future.”

She recounted other polarized times in history – the Cold War, the Vietnam War, Apartheid in South Africa, the U.S. Civil Rights Movement, and the Berlin Wall.

Though things look bleak, Watkins said, we will get through them.

“It’s up to us to take up the mantle of loving our enemies, of seeing each other as brothers and sisters and friends even as we passionately, vociferously, and even loudly defend what we know is right,” she said. “It’s up to us to keep trying until that day when unity is achieved, a unity of justice and righteousness and repair — that day when our problem and Alexander Campbell’s problem is resolved.

“The reason I know we will find a way toward the common good, a way toward unity with justice even in a time of polarization is because we have done it before,” she said.

“Our founder believed that Bethany’s form of education should be a catalyst for critical thinking, reasoning and to liberate the mind from ignorance, superstition, tyranny,” Rodenberg said. “In essence, what Campbell wanted in this place is what we live out today a college (that is) a place of hope for society where the greater good can prevail. He believed in a mission that we have reaffirmed today to create leaders to demand and design a world of worth and value.”

A wreath-laying service was held at Campbell’s grave at nearby God’s Acre Cemetery after the convocation.

Founder’s Day is celebrated annually on the first Thursday of March. Bethany College received its original charter March 2, 1840, from the Legislature of Virginia. It was reaffirmed on June 20, 1863, by the legislature of newly formed West Virginia. 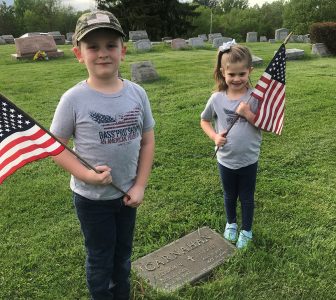