Applebee’s Restaurant Closes at The Highlands 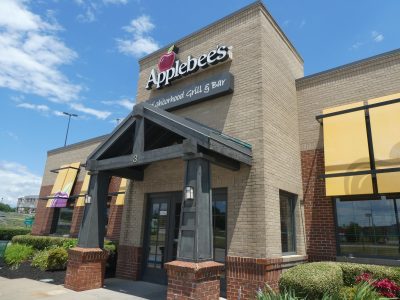 The Applebee’s restaurant at The Highlands is now permanently closed.

TRIADELPHIA – A sign posted on the door of the Applebee’s restaurant at The Highlands on Wednesday informed the public the restaurant is permanently closed.

“Please visit our locations in St. Clairsville and Zanesville, Ohio,” the sign stated. “Thank you for your patronage.”

Phone calls to the restaurant went unanswered Wednesday, and messages left with corporate spokeswoman Melissa Hariri were not immediately returned.

Ohio County Commissioner Randy Wharton, also president of the Ohio County Development Authority, said he had heard of the closure but did not know why the restaurant shut its doors.

Unlike most of the businesses at The Highlands, Applebee’s is not a tenant of Ohio County Development Authority. It and the neighboring Russell Stover’s store sit on property owned by Cabela’s.

Outside the restaurant on Wednesday, small American flags still sat with flowers among the landscaping.

Signs on the walk leading to the front entrances still sat six feet apart, reminding guests to keep their social distance while waiting to enter inside.

A woman stopped by to see if anyone might still be inside the restaurant. Her boss had heard of the closure, and sent her to see about how he might obtain one of the photos hanging on the wall. One of his family members was featured in the photo, she explained.

The restaurant at The Highlands also once had a mention in a Saturday Night Live skit.

The segment portrays former U.S. Sen. Robert Byrd testifying before a senate committee, asking if his request to move the Iraqi National Museum of Antiquities to Wheeling had been given any consideration.

“We have an Applebee’s now,” the fictitious Byrd told the committee during the skit. “There’s ample parking.”