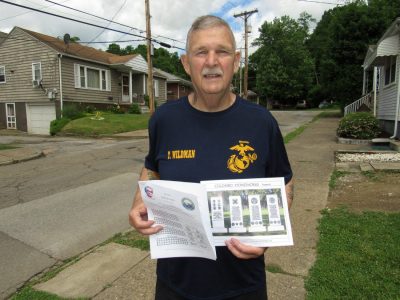 Terry Wildman, chairman of the Veteran Memorial Committee in Martins Ferry, poses with a rendering of the four sides of the new memorial along with the brick paver order form.

MARTINS FERRY – A campaign is underway to erect a new $24,000 memorial to honor all veterans and more at Riverview Cemetery.

Leading the campaign is Terry Wildman, a Vietnam War veteran and city resident. Wildman said the solid granite memorial will be 6 feet tall and have engravings on all four sides, including the insignias of the branches of the military, along with insignias of groups dedicated to veterans, such as the Veterans of Foreign Wars, American Legion, the Disabled American Veterans and more.

Writing on the memorial will include statements about why it was erected.

For example, the VFW side will say: “Erected as a lasting tribute, this memorial is dedicated in sincerity to the dead whose valiant efforts and selfless sacrifices have made America great. God grant that the liberty of humanity won only by brave souls, and vigilantly guarded, shall live on with increased strength and spirit for all ages to come. To the men and women who served their country in all wars. More lasting than words and more glorious than praise is our gratitude and their great sacrifices.”

To help raise money for the effort, people can purchase a brick paver with their choice of engraving that will be used in a path to the memorial, which will be located atop the cemetery.

Order forms can be obtained from the Martins Ferry Police Department at 740-633-2121, from the Rev. William Webster at Grace Presbyterian Church and from Wildman by calling 740-633-0964.

Wildman said the bricks do not have to be dedicated to only veterans, but they can recognize other heroes as well, such as police officers, firefighters and EMS workers.

In a letter to businesses and community members regarding the campaign, Wildman explained why the new monument is important. He noted 333 brick pavers will raise the money needed.

“As a community we have supported our country from the War of Independence to the War on Terrorism. When the call was given, our people volunteered to fight oppression and hatred, tyranny and dictatorships,” he said.

“Standing up for freedom and justice has been our distinctive feature. As a community we have battled blazes, fought crimes and cared for the sick.

“United we have labored together to bring hope. This has been our hallmark. This is who we are.”

The memorial will be made by Randall Gallagher Memorials. The brick pavers are being donated by Lollini & Sons Brick and Stone.

Money for the project is being funneled through Project Forward, which already is set up as a non-profit group.

The bricks can be personalized with up to 13 characters. The order forms will provide a space, directions and examples on how to do it properly.