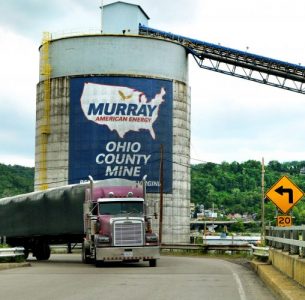 ST. CLAIRSVILLE – Murray Energy Holdings issued layoff notices to nearly 350 workers at six of its subsidiaries in Eastern Ohio as part of its bankruptcy restructuring.

Murray Energy also announced late last month that about 2,500 of its workers in West Virginia could be laid off next week. An official with the United Mine Workers of America said this week the union does not expect any of its 1,800 union miners in West Virginia to be terminated and that the WARN notice was most likely due to Murray undergoing bankruptcy proceedings that began in October.

However, the miners at American Energy mine at Beallsville are not unionized, raising questions about whether they or workers at the other Ohio facilities could face termination. Only the four workers at The Ohio Valley Transloading Co. are listed as being represented by the UMWA.

Jason Witt, a spokesman for Murray Energy, said he could not comment on the matter Wednesday.

Citing billions in debt and a declining demand for its primary product of steam coal, Murray Energy filed for Chapter 11 reorganization in late October after failing to make payments to creditors.