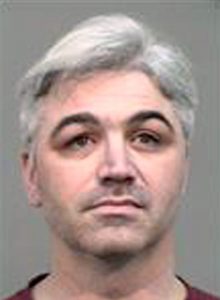 This undated photo provided by Southeast Ohio Regional Jail shows Rev. Henry Christopher Foxhoven. Authorities are investigating the circumstances surrounding the Roman Catholic priest taking a now-pregnant altar girl to a wedding reception last year and whether the diocese responded appropriately when officials learned about the outing. Foxhoven was charged this week with sexual battery after informing the Steubenville diocesan bishop about his relationship with the 17-year-old. (Southeast Ohio Regional Jail via AP)

Henry Christopher Foxhoven, the Catholic priest who admitted impregnating a 17-year-old altar girl, has been defrocked.

Foxhoven, 46, is serving 12 years in jail after pleading guilty in Athens County, Ohio in November 2018 to three counts of sexual battery.

The pope’s decision was communicated to Diocese of Steubenville Bishop Jeffery Monforton on June 3, and to Foxhoven on June 19.

“We must remain vigilant in assisting victims of sexual abuse,” Monforton said. “We take every accusation very seriously and we will continue to do so.”

Monforton had revoked Foxhoven’s ministerial faculties and suspended him from priestly ministry on Oct. 27, 2018, when he learned Foxhoven had admitted to having sexual contact with a minor. At the same time, diocesan attorney Tom Wilson filed a report with the Athens County Sheriff’s Department, where Foxhoven said the abuse had occurred and the diocese “fully cooperated with authorities in their investigation,” a news release issued by the diocese Friday noted.

The bishop also notified the Congregation for the Doctrine of the Faith, and Pope Francis’ decision to dismiss Foxhoven is the result of that canonical process, the diocese said.

Foxhoven had most recently served as pastor of St. Mary of the Hills Parish in Buchtel and Holy Cross Parish in Glouster. Glouster is in Athens County, while Buchtel is in Athens and Hocking counties. At other points during his career, Foxhoven served Catholics in Belmont, Jefferson, Harrison and Monroe counties, having been listed as the celebrant for funerals that occurred in the St. Clairsville area in 2006 and 2007. He also participated in religious rites in Amsterdam in 2009 and in Wintersville in 2010, and had been listed as the parochial vicar of the Basilica of St. Mary in Marietta in 2013.