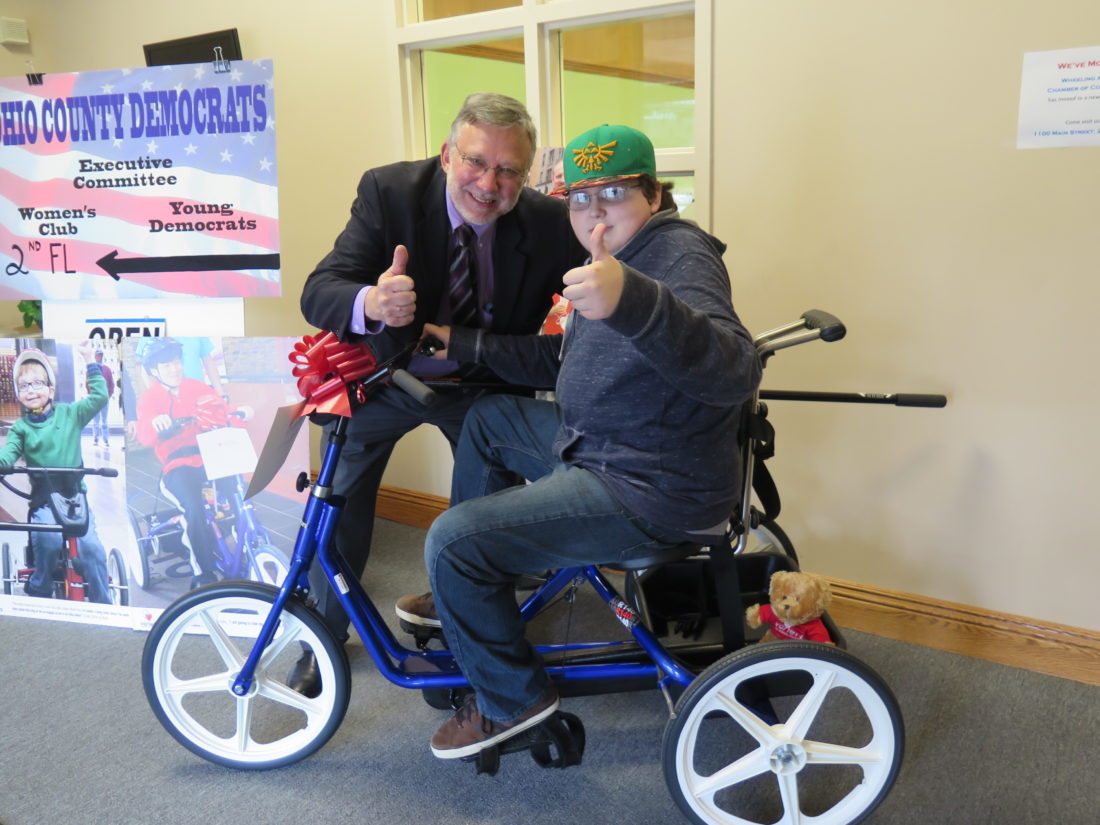 WHEELING — Warwood Middle School student Nathan O’Hara didn’t say much, but he did smile as he rode his brand new bike — a blue one adapted to his physical needs — up Market Street on Friday.

And now he will be able to ride alongside his father, Bernard, on the Wheeling Heritage Trail.

O’Hara was the latest recipient of a Rifton adaptive bicycle from Variety-The Children’s Charity, a Pittsburgh-based charity that provides eligible children with disabilities special bicycles customized for their physical limitations.

“These bikes affect the whole family, not just the child with the disability,” said Charles P. LaVallee, CEO of Variety. “It becomes something they can do together.”

“I know there have always been kids who have felt left out of things, and it’s not fair.”

The bikes, valued at about $1,800 each, are provided free to qualifying children through donations from area businesses. Since 2012, more than 1,200 bicycles have been distributed, according to LaVallee.

But he also said Variety isn’t getting applications from families interested in obtaining an adaptive bicycle, and there are currently at least 40 awaiting qualifying children.

There is an income eligibility requirement, but it is intentionally set considerably above poverty levels, LaVallee said. A four-member home could have a household income of $97,500, and still be eligible under the guidelines.

Applications can be obtained through Variety’s website at www.varietypittsburgh.org/MyBikeProgram.asp., or by calling the Variety office at 724-933-0460.

Deb Frazier, a physical therapist with Ohio County Schools, encouraged the O’Hara family to apply for the bicycle.

“These bikes have so many therapeutical benefits for the child,” she said. “There’s the exercise, and there’s the socialization. There’s even reciprocal movement on the legs, and it will help him with his endurance and strength.

“On top of that, it’s just fun and normal for the child.”

Nathan’s bicycle has three wheels, a wide seat and a guide bar that permits a helper to assist him with his steering. The bike can also be raised up, locked, and used as a stationary bike.

Nathan’s father, Bernard, said there are times when he works out at home using his exercise cycle, and now Nathan can join him.

“He has never ridden a bike before,” Bernard said of Nathan. “He has had them, but he hasn’t ridden them.”

He said it now would be an easy task for the two of them to ride on Wheeling’s bicycle trail, which is just two blocks from their home in Warwood. On Friday, he assisted Nathan in steering by using the guide bar, but Bernard suspects he won’t need to much longer. Nathan peddled very fast up the sidewalk on Market Street in front of the offices for the Community Foundation for the Ohio Valley Inc.

Among those present to watch Nathan ride on Friday was Amy Dobkin, spokeswoman for XTO Energy. The company has purchased 20 bicycles for Variety to distribute, Dobkin said. In the past they’ve done the presentations in their office and organized a bicycle parade for the recipients, she added.

“I ride a bike, and I ride with my son,” she said. “Everyone should have the ability to do it.”