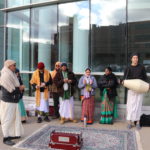 Photo provided Members of the New Vrindaban Krishna community in Marshall County gather at the federal courthouse in Wheeling Thursday to express opposition to the builders of the $4.3 billion Rover Pipeline enacting eminent domain against them.

The same company behind the Dakota Access Pipeline in the Midwest — Dallas-based Energy Transfer Partners — is building the Rover Pipeline from Doddridge County, W.Va. to Michigan. To accomplish this, the firm last month filed hundreds of eminent domain claims in Ohio and West Virginia against property owners with whom right-of-way agreements could not be reached.

Members of the New Vrindaban community feared the pipeline, which will be 42 inches in diameter for most of its route, would decimate certain areas of their more than 1,700 acres of land. Although the Palace of Gold is the most well-known portion of the property, community members believed several other “sacred spaces” were at risk.

Many felt such passion about the issue they held a demonstration outside the courthouse early Thursday.

“Our intention is to make our case on how this affects our sacred spaces. We hope we can come to an understanding that will bring us to a compromise to lessen the impact and protect those areas,” community President Jaya Krsna Das said.

In the end, community leaders reached an agreement with Rover attorneys that both parties believe will allow them to proceed amicably.

“We are not against it. We just wanted to protect our holy areas.” Gabriel Fried, executive agent for the community, said. “They were willing to move off the sacred spaces.”

“This is a nice gesture — I appreciate it,” Krsna Das said after attorneys made the agreement.

Both Fried and Krsna Das said the dispute was not about money, but said the community will get more than the company originally offered. Fried said the pipeline will cover more than one mile of the community’s property, with the permanent right of way being 50 feet wide.

The Federal Energy Regulatory Commission granted Rover the right to build its conduit to ship up to 3.25 billion cubic feet of natural gas per day last month. However, slight alterations to the route – which are part of the agreement with New Vrindaban – will prevent the company from clearing all required trees.

Therefore, members of the community agreed to start cutting the trees in these areas so Rover can meet its March 31 deadline of having the trees cleared.

“We are grateful to the judge for giving us time to negotiate,” Fried added of U.S. District Judge John Preston Bailey.

After the proceedings, William Wilmoth, one of Rover’s attorneys in the matter, said the company was glad to reach an agreement.

“Rover takes religious freedom very seriously and tries its best to protect sites that are sacred,” he said.

“We were able to agree on compensation for the right of way and most importantly, agree on minor route changes that avoided all sacred sites and mitigated any impact to the environment,” Energy Transfer Partners spokeswoman Vicki Granado added. “This is the result of all parties being willing to come together to openly and effectively communicate to solve an issue. This clearly demonstrates that infrastructure and sacred sites can co-exist in this country.”

Although neither side would discuss the compensation, officials confirmed it was more than Rover initially offered.

Wilmoth said Rover reached settlements with “every party who showed here today.” For those who did not attend the hearing or achieve other agreements, Wilmoth said they will be paid for their land via the eminent domain action.

Rover is one of several interstate pipelines that will come through the Upper Ohio Valley, along with the Atlantic Coast Pipeline, the Mountain Valley Pipeline, the Leach XPress, the Mountaineer XPress and the Nexus Pipeline. Industry leaders believe are necessary to move natural gas to market, which will ultimately lead to more drilling and fracking.

Rover filed a similar federal lawsuit in the Southern District of Ohio, as the pipeline system runs through portions of Belmont, Monroe, Harrison and Jefferson counties. There are so many defendants in Ohio that the first 258 pages of the complaint are devoted to identifying them.