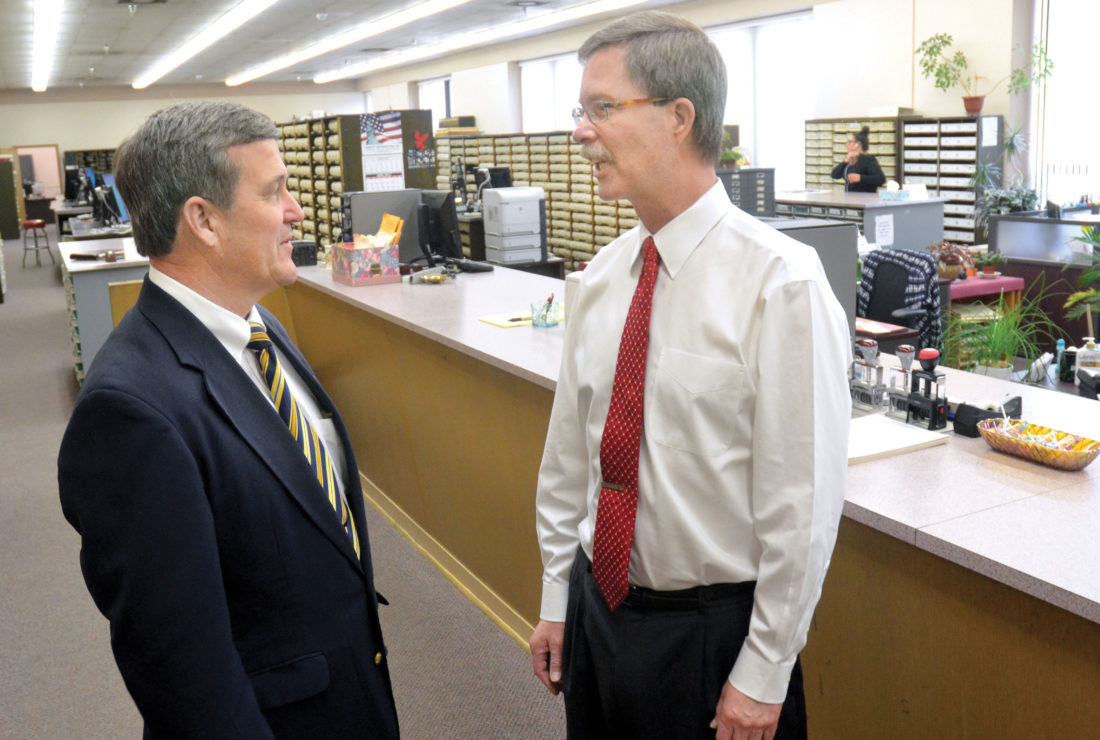 WHEELING — West Virginia Secretary of State Mac Warner traveled through the Northern Panhandle to meet with several county clerks Monday in an effort to make a personal connection with each individual office as he works to keeps voter registration lists as up to date as possible.

“There had been a breakdown previously between the county clerks and the secretary of state’s office, and to repair that I have developed a field team with some field representatives,” Warner said during a stop in Ohio County. “They have been out talking with the county clerks, but I want to do it myself to make that connection, that personal touch, mainly to talk about one of my priorities, and that’s cleaning up voter registration lists.”

He said while he believes county clerk offices statewide have been doing a “wonderful job” making efforts in cleaning up voter rolls, there is still a lot of work to do.

“Clerks have taken off 47,000 names (from the voter registration lists) in the 98 days I’ve been in office. Some of those have been some rather dramatic numbers in some of the counties,” he said.

Warner said clerks in the Northern Panhandle have been doing a good job in coordinating their efforts. He said just last week, some clerks were able to clean up their lists even more by removing people who have been convicted of felonies.

Warner said through a new electronic information registration database, it will be much easier for clerks and his office to find “duplicate voters” and “duplicate registrations” that exist across county and even state lines.

“That’s going to increase these clerks’ work load, but once they do that and clean up those lists, it’s going to decrease their work load over time. They won’t have as many people to keep track of,” he said.

Warner said nothing but good will come out of working with the new database, as he believes it will continue to reduce the opportunities for fraud or irregularities.

“The final thing is the voter participation will go up. … People will have higher trust in the results of an election and the candidate they elect, and the candidate who is elected will now be able to operate with a high degree of confidence that the majority of people did in fact vote for them,” Warner said. “We’re still just getting started. I predict this is only half to one-third of the number of people that are eventually going to come off the voter lists once we get through the entire process.”