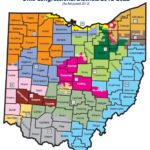 MARTINS FERRY — A ballot initiative aimingto eliminate “gerrymandering” in Ohio’s congressional districts has received approval from the Ohio Ballot Board.

The proposed amendment is sponsored by Fair Congressional Districts for Ohio, a group formed by the League of Women Voters and other supporters. For the Bipartisan Congressional Redistricting Reform Amendment to be placed on the ballot, the Ohio Ballot Board requires that petitioners collect at least 305,591 signatures across at least 44 of Ohio’s 88 counties by July 5.

“Following the unanimous Ohio Ballot Board approval of the ballot initiative, the Fair Congressional Districts for Ohio Campaign Committee is eager to get to work to ensure Ohioans have an opportunity to vote on this critical issue,” Ann Henkener of the League of Women Voters said in a statement Thursday. “Many of us have been working on this reform for years. It’s time to get it done.”

The proposed amendment would give responsibility for drawing congressional districts to the bipartisan Ohio Redistricting Commission. The measure would be implemented after the 2020 Census. The new congressional district boundaries would take effect in 2022. The commission consists of the governor, the secretary of state, the auditor of state, and one person each appointed by the Ohio House and Senate majority and minority leaders. No member of Congress would be able to serve on the commission.

“The proposed constitutional initiative builds on the success of the bipartisan Issue 1, which was endorsed by 71.5 percent of Ohio’s voters in the 2015 general election. It would transfer from the legislature to the new bipartisan Ohio Redistricting Commission responsibility for drawing new district lines, and would allow any Ohio citizen to submit a proposed plan for the commission’s consideration. Any plan would have to receive at least two votes from the representatives of each party to be adopted,” the Fair Congressional Districts for Ohio campaign states.

The main stipulations of the proposed amendment include: no congressional map can be drawn to favor or disfavor a political party; each district must be nearly equal in population; the plan must minimize splitting of counties and municipalities; and districts must be geographically contiguous and compact.

“There is a definite need to end the gerrymandering of Congressional districts. Ohio is basically a 50-50 state if you look at the last few presidential races, yet the Republicans hold a 12-4 edge in U.S. House seats,” said Ohio Rep. Jack Cera, D-Bellaire. “I would encourage voters to look at the actual district maps, and they will clearly see that the current districts make no sense and are drawn to make sure one party has a political advantage. This is also evident from the fact that very few, if any, Ohio congressional races are competitive.”

Cera believes that gerrymandering has driven both parties to the “extreme fringes” that are “out of touch” with the average Ohio voter.

“While I’m not certain this initiative is the best answer, it is a good start in ending gerrymandering and the gridlock in Washington,” Cera said. “Ohio is expected to lose another congressional seat after the 2020 census, so it is even more important that redistricting is done right. This is especially true in our area, which will likely be targeted as a district that is changed.”