Brooke County Schools Will Be Consolidated Next Year

Seven schools to be combined into four in 2018

WARREN SCOTT For The Intelligencer 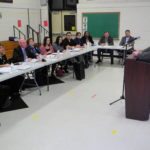 Photo by Warren Scott Kenny Orban, a Colliers resident, was among residents who asked the Brooke County Board of Education to reconsider plans to consolidated its seven primary schools into four at a hearing held Monday at Jefferson Primary School. Citing declining enrollment and revenue, the board moved to close Colliers, Lauretta B. Millsop and Beech Bottom primary schools and establish new schools serving grades K-2 and 3-4 at the county’s remaining four primary schools.

FOLLANSBEE — At seven hearings held over the past several weeks, the Brooke County Board of Education heard opposition to plans to merge the county’s seven primary schools into four.

But citing financial data provided by its staff, the board on Monday unanimously approved the consolidation, which will involve the closing of Colliers, Lauretta B. Millsop and Beech Bottom primary schools, and a renaming and reconfiguration of grades attending Franklin, Wellsburg, Hooverson Heights and Jefferson primary schools.

In fall 2018, pupils in kindergarten through second grade are slated to attend Hooverson Heights and Wellsburg primary schools and those in third and fourth grades to attend Jefferson and Franklin primary schools.

The decision came at the last hearing, held at Jefferson Primary School, after Board President Brian Ferguson asked Kimberly Puskarich, its treasurer, how soon the district could expect to go into deficit spending if it continued to operate the seven schools.

Puskarich responded that would occur by the end of the current fiscal year. She estimated the closings will save the school district about $1 million by eliminating nearly 77 professional and service personnel not funded by the state.

Superintendent Toni Shute said the school district’s five-year operating levy generates about $3 million each year for staff not covered by the state, extracurricular positions and substitutes, but those costs have risen to more than $4 million.

Kenny Orban of Colliers noted Colliers Primary School is one of three West Virginia schools and the first in Brooke County to be named a National Blue Ribbon School by the U.S. Department of Education. He asked whether the board wants to be known for closing a school with such recognition.

Shute noted the closing is in keeping with a 20-year facilities plan, required by the state, that called for all seven Brooke County schools, regardless of such distinction, be replaced with two new buildings.

She said building the new schools would mean higher taxes for residents, so the board opted instead to consolidate as a transition to the original plan.

Don Stilgenbauer, a Colliers pastor, said the decision is prompted by budgetary issues alone and not what is best for the students. He is among residents who have asked the board to consider other options, including moving pupils from L.B. Millsop in Weirton to Colliers, and keeping that school open.

She and others said some have spoken of transferring their children to other schools or home-schooling them.

Shute said the board has until Dec. 31 to submit its plan to the state and can’t amend it again before doing so.

She and Rhonda Stubbs, the school district’s director of pre-K-5 curriculum, said bringing more teachers of the same grades under one roof will allow them to collaborate with teaching plans and give them more flexibility in grouping pupils for various purposes.

Stilgenbauer also asked about $7 million in lieu of taxes the school board is expected to receive from the planned development of a natural gas-fueled power plant in Colliers.

Ferguson and others said construction of the plant, if approved, is expected to occur over three to five years, and while its developers have agreed to use local labor, the workers aren’t likely to be all Brooke County taxpayers.

He said the $7 million will come over 30 years.

Shute said the four remaining schools should be able to serve any additional families the development brings and if not, that could be addressed with an update to the 10-year plan to be done in the near future.

“You’ve got people who put education at a very high priority. Pay them back.”

Someone asked about an earlier statement by Ferguson that $2 million had been saved by reorganizing the board’s staff.

Shute said the savings “kept us above water” but didn’t offset a reduction in recent years to state funding for school staff and continually declining enrollment.