Ohio Valley Wonders If Ethane Cracker Is Still in the Pipeline

As 2017 Nears An End, Still No Final Word From PTT 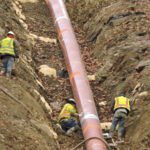 Photo by Casey Junkins Natural gas pipeliners continue working at sites throughout the Upper Ohio Valley, including this one along W.Va. 2 near McMechen. Just across the Ohio River, PTT Global Chemical officials may build a $6 billion ethane cracker.

DILLES BOTTOM — As 2017 nears its conclusion, Upper Ohio Valley residents continue waiting for a decision on the PTT Global Chemical ethane cracker — a potential $6 billion investment for which company officials in February said they anticipated a final decision by the end of this year.

“I am, like everyone else, just waiting to find out,” Ohio Rep. Jack Cera, D-Bellaire, said. “I am waiting and anxiously hoping for it.”

Frustrating as the delay may be for government leaders, housing and retail developers, education professionals and other interested parties, those who are waiting to learn if the Thailand-based firm will acquire their property as part of the project are in a state of limbo.

“Crickets,” is how attorney Jonathan Turak — who represents several Dilles Bottom property owners in their dealings with PTT — described recent interactions with the company and/or its representatives. “They’ve not reached out to us since at least October.”

Last week, PTT spokesman Dan Williamson said the firm does plan to make some sort of announcement regarding the project by the end of the year, but declined to be more specific.

“While a final investment decision has not yet been made, PTT Global Chemical America continues to collaborate with JobsOhio and local partners, while investing time and resources to move this project forward,” said Matt Englehart, spokesman for JobsOhio, the private development corporation signed into law by Gov. John Kasich in 2011 to replace the state-run Department of Development.

A statement on the company’s website states it “anticipates reaching a final investment decision in late 2017.”

“I do not think that PTT committed to a decision by the end of 2017, but more that it had hoped it might have one,” Belmont County Commissioner Mark Thomas said. “We are very patient, and we remain cautiously optimistic that it will be a favorable announcement when PTT is ready.”

Turak, however, on behalf of his clients, wishes the company would expedite the process.

“I think, with the manner in which they are approaching it, it creates a great deal of stress and anxiety. I am very, very perplexed by it,” he said.

Ginny Favede is now the executive director of the Ohio Valley Construction Employers Council Inc. and the co-chair of Project BEST, while she previously served a pair of four-year terms as a Belmont County commissioner after her 2008 election.

“In 2012, we thought for sure (Royal Dutch Shell) was going to come, but they decided to go to Monaca, Pa. That was more than five years ago now,” she said. “I know it’s tough, but sometimes we just have to be patient.”

“It’s obviously a huge project, bigger than anything we’ve ever seen,” Cera said. “When something is so big, I supposed there are a lot of working parts that they have to make sure fit together.”

The following is a timeline of notable events for the PTT ethane cracker for Belmont County:

∫ October — PTT officials sign a memorandum of understanding with JobsOhio to “enhance the well-being and quality of life” for those who live in the Dilles Bottom area.

“I never got a real explanation for that,” Cera said regarding the intent of the MOU. “I have heard a lot, but there is not a lot that is solid.”

“As for Belmont County, in the commission’s opinion, PTT can take all the time it wants to make the most fiscally responsible decision it can make,” Thomas added.

Ethane is one of the liquid forms of natural gas prevalent in Marcellus and Utica shale wells. Any ethane cracker will take the ethane to “crack” the liquid into ethylene. Last year, PTT Project Director Paul Wojciechowski said preliminary plans called for having additional infrastructure at the Dilles Bottom site which would then transform some of this material into ethylene glycol for antifreeze, while even more onsite machinery would turn the rest of the ethylene into polyethylene for making plastic goods.

Favede said the project would employ approximately 6,000 construction workers, though not all at once. She said said at least 50 percent of the workforce should consist of people who already live in the Upper Ohio Valley, but she knows many of the employees will come from other areas.

“As soon as we get an affirmative decision, we will start training more people,” she said. “That is a problem I look forward to having: not enough people to fill a job.”

Favede said these construction workers would also likely get to build related plants that follow construction of the ethane cracker.

Along with the temporary construction jobs, the cracker would likely lead to hundreds of full-time petrochemical jobs for those in fields such as engineering.

With so much potential, Turak wonders why the company is moving in such a manner with its property acquisition deals. He emphasized that his clients had no intention to move until company officials approached them with offers they believed were inadequate.

“We just really would like to know what their intentions are,” Turak said. “Given the scope of the project, it seems they are creating an awful lot of anxiety among my clients to save a few nickels,” he said.

Turak maintains no one has used the words “eminent domain” during the property negotiations. He said if a government entity would get directly involved in the project, eminent domain claims could be, at least, conceivable.

“What I am really hoping for is that the actual decision-makers will sit down with us to give us a chance to explain our circumstances to them,” Turak said.