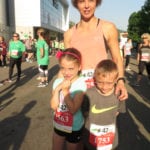 Photo by Joselyn King Members of the Spangler family, of Moundsville, await the start Saturday of the Ogden Newspapers Half Marathon Classic. Pictured are mom Jill Spangler, in back, and twins Nicole, left, and Nathan.

WHEELING — The youngest particpants in the Ogden Newspapers Half Marathon Classic have so much energy they don’t need to train.

“He makes daddy chase him every day,” said Ed Sparks, of Wheeling. His son, Jaece, was one of three 6-year-olds registered Saturday for the 5K race.

Twins Nicole and Nathan Spangler, of Moundsville, also participated in the 5K race along with their mother, Jill Spangler, a registered dietician at Wheeling Hospital.

A concern for proper diet while training for a long run also isn’t necessarily a priority for the young.

Jaece Sparks, a student at the Warwood School, was asked what he eats to prepare for his run. “Pizza!” he answered.

And how does he reward himself when he completes his race?

“I play video games,” he said.

The Sparks said they haven’t been runners, and they suspect Jaece’s interest in running was sparked at school.

Spangler, though, said she is a runner, and her twins have developed an interest to run alongside her.

Nathan Spangler was asked how far he can run.

“I run three miles an hour,” she said.

They said they like to eat meat to train, along with fruits, vegetables and cheeses.

“Chocolate milk… and smoothies,” he said.