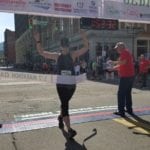 Photos by Andy Lloyd and Joe Lovell Barnesville’s Carl Kondrach and Wheeling’s Lauren Ritz were the walk winners of the Ogden Newspapers Half Marathon Classic.

WHEELING — Carl Kondrach and Lauren Ritz are both quite familiar with the challenges the roads of Wheeling pose to runners.

They’re both equally adept at mastering those challenges.

Kondrach, from Barnesville, and Ritz, from The Friendly City, both claimed walking crowns Saturday morning at the 42nd annual Ogden Newspapers Half Marathon Classic.

For Kondrach, who was the top male and overall walker, finishing with a time of 2:10:11.7, this year’s event presented a different set of challenges, those of which mainly concerned battling the heat and increasing humidity levels.

“I’m pretty familiar with the course,” said Kondrach, the top male half marathon walker five of the last six years. “The last three or four miles it got really humid, so I had to back off a little bit.

“I’m happy with my time. There’s some really good competition here. I’m glad I got out of the humidity before it got much worse.”

Ritz, the top female walker in 2015 and 2016, said the entire course poses a challenge.

“Twenty-ninth street gets you right off the bat,” she said. “Then, you’re feeling pretty good. You make it through Elm Grove feeling good, and then ‘Chicken Neck Hill’ you’re like ‘Oh, man.’ Then, Wheeling Hill is a killer.”

Ritz has both ran and walked the course, doing so usually with friends.

“I work harder when I walk, so it’s a lot easier to run,” Ritz said. “Just because if I walk, I’m really watching my form and when I run I tend to be a sloppy runner. So, walking for me is more of a task.”

Sarah Donley, of Bethesda and Kondrach’s running partner, was the second female to cross the finish line, finishing sixth overall in 2:37:49.7. Wheeling’s Megan Phillips was eighth in 2:39:47.6.