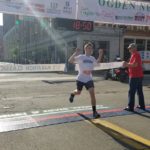 WHEELING — Youth was served Saturday morning in the 42nd edition of the Ogden Newspapers Half Marathon Classic 5K.

Angelo Quattrochi, who just recently completed his sophomore year at Weirton Madonna, turned in an impressive performance in besting a large field to capture the overall crown.

The youthful Blue Don from New Cumberland is coming off a strong showing in last weekend’s West Virginia state meet. Quattrochi finished in fifth place in the Class A 3200-meter run.

The race was staged in warm and sunny conditions and included a field of more than 100 runners.

“Going into the race my goal was just to finish in the top three in my age group. So I am quite happy with winning the overall title,” Quattrochi said. “I am still in good shape from track season. I have been running 4-6 miles a day to prepare for this race.

“The heat was perfect. It wasn’t too hot for me. This is the first time I have run it. I plan on do a lot of training and some more 5K races to get ready for cross country season.”

Quattrochi’s margin of victory was 20 seconds.

Heath Piper took home the runner-up award via his 19:09.1 reading. This marks the third year the Fredericktown, Pa. resident has participated in the Ogden Classic.

“The heat was somewhat of an issue. I am also just getting back into running form. I suffered an injury playing basketball a few months ago,” Piper, 36, said. “I have been putting in 40-55 miles a week. I plan on coming back for the Debbie Green race while also running some 5Ks in the Pittsburgh area.”

Ryan Campbell of Moundsville was third in 19:51.8 while Jeffrey Wesolowski of Wheeling took home fourth in 19:59.0. St. Clairsville’s Jason Panas rounded out the top five with a 20:09.8 effort.

Last year’s champion — Russell Mulley of Alexandria, Va. — did not return in an attempt to repeat. Mulley is a 2009 Wheeling Park graduate and was a key figure for the Patriots in their 2007 and 2008 state championship cross country campaigns under the tutelage of Michael Jebbia.