No Major Injuries During Race 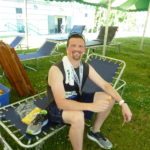 WHEELING — Runners and walkers were challenged by Saturday’s heat and humidity, but no major injuries were reported from the Odgen Newspapers Half Marathon Classic events.

“A couple of people fell and got scraped up,” he said, but they didn’t require emergency transport to a hospital.

Helms said two participants who didn’t complete the race were transported back to the starting line by Wheeling Fire Department personnel.

Physicians from Wheeling Hospital staffed the medical tent for the race. Physical therapists from Mountain River Physical Therapy in Wheeling operated an adjacent tent for runners and walkers who had leg cramps and other minor complaints.

Dr. Enoch Chang, a sports medicine specialist at Wheeling Hospital, said doctors handed out ice and water at the medical tent and treated a few participants who sustained scrapes and minor cuts.

Late in the race, he said they treated a participant who “had a little bit of dehydration and was slightly light-headed.” After drinking water, the patient was OK, he said.

“A lot of people are coming in with cramping,” said Chang. “Physical therapists are helping them.”

Despite the heat and humidity, the overall number of people seeking medical aid remained low.

“It’s a good sign,” Chang said. “They must be hydrating well out there.”

“We’ve been very busy, but nothing major … mostly cramps and being tight after the race,” said Adrian Moses, team leader for Mountain River Physical Therapy.

Dr. John Holloway, one of the event’s Ironmen from Wheeling, stopped by the medical tent to rehydrate and rest after finishing the Half Marathon Classic Run. Discussing the race conditions, the private physician said, “It’s so hot. It’s just tough on a day like this.”

Susie Fullerton, a registered nurse at Wheeling Hospital, said this year’s Half Marathon Walk had the second hottest temperature that she could remember. After completing the walk, she said, “It was hot.

Regular participants, such as Fullerton, know the physical challenges they face while training for the event, but they can’t predict the temperature or humidity on race day.

“I always know what I’m going to be facing as far as the course,” she said.

As a nurse, Fullerton kept an eye out for fellow walkers and runners as she walked.

“I was watching,” she said. “I saw a lot of people who would stop and walk beside me. They said they were feeling nauseated. They would slow down and get water and ice and Gatorade.”

David Cook, a former Wheeling resident who now lives in Hilliard, Ohio, participated in the Half Marathon Classic Run for the first time. Resting in the medical tent, he said, “My foot is sore, that’s all.

“It was hot and there were a lot of hills,” Cook said, but added, “I knew the hills were coming.”

Elliot Ferrell, a third-time runner from Wheeling, said it was definitely hotter Saturday than the other times he ran.

“I had a good pace starting out,” he said at the medical tent. “I ‘hit a wall’ right before Chicken Neck Hill. I walked and ran. At the top of Wheeling Hill, I started running again. I finished running.”

“I kind of knew what it would be like,” she said. “It got kind of hot, but I took lots of drinks along the way.”

Teresa Gagliardi, a nurse from Steubenville, was icing her knee after completing her first-ever 5K walk. She attributed her knee pain to age.

“I needed to train differently,” she said. “But it’s awesome. I feel great.”

Gagliardi’s cousin, Kenny Andresen, of Steubenville, joined her for the 5K walk.

“It was pretty challenging at the end because of the uphill (section),” he said, then added, “I think I’ll come back.”

Rick Soos, of Tiltonsville, was bothered by the heat in his ninth Odgen Newspapers Half Marathon Classic Run but he was buoyed by the support of spectators along the course.

“It is wonderful,” he said. “It is so uplifting. People, who don’t know you, are cheering for you. That is such a big lift, that really helps to carry us through the race.”