Putting the ‘Fun’ in Fun Run 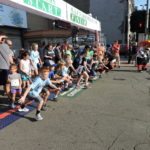 Photos by Shelley Hanson Fun Run participants take off Saturday from the start-line of the non-competitive 1-mile race in downtown Wheeling.

WHEELING — Those kids know how to put the “fun” in Fun Run.

Dozens of children participated Saturday in the non-competitive Ogden Fun Run in downtown Wheeling. The mile run began at the half marathon’s start/finish line on 14th Street.

Before the race began, it was all the children could do to contain themselves and not take off before the official start. As the last race walkers passed by on Main Street, the children were given the OK to ready, set, go!

Siblings Quinn Mamone, 6, and Aliyah Mamone, 5, ran the race with their father, Michael Mamone, of Bridgeport, and grandmother, Carol Mamone, of St. Clairsville. Their mother, Karen, and older sister, Madie, planned on running the 5K together.

Before the race began, Quinn said she was looking forward to running.

Michael Mamone was looking forward to participating as well.

“I’m just excited for them to do their first race,” he said of his younger daughters.

Carol Mamone said she works at The Health Plan and was happy to see her co-workers participating in various races together.

First-time fun runners siblings Brenna Tipton, 8, and Kallon Tipton, 7, were accompanied by their father, Lee Tipton. Their mother, Sarah Tipton, was planning to run the half marathon. Although it was Kallon’s first time at the Fun Run, he said he had participated in a 5K race in Woodsdale. That experience must have helped him get ready for Saturday. Although the race was non-competitive, Kallon was first to cross the finish line.

First-time fun runner Rylea Bamberger, 12, was accompanied to the race by her mother, Tina Bamberger, of Wheeling. Bamberger is not new to racing, however, as she joined her track team at Triadelphia Middle School this past school year.

Tina Bamberger said her daughter did the 400 meter and 200 meter races for her school team.

“We wish everybody good luck,” she said.