Running Still a Way of Life for Ironmen 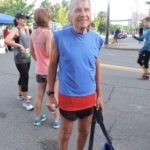 WHEELING — Seven runners coming to compete in the Ogden Newspapers Half Marathon Classic have made the journey each year for more than four decades.

More than just keeping the streak alive and scoring that attractive Ironman jersey each year, many among them said the run represents more than a tradition to them, but a motivator to keep active.

“The race itself is a celebration,” said Larry Jones. “The streak keeps me coming back, but it forces me to train all year long, which is a good thing for health and quality of life purposes.”

Jones said the weather was beautiful before starting his run Saturday morning, as it always is on race day — which he said is the case no matter the actual forecast. His fellow ironman Steve Habursky, however, said he was feeling the heat and humidity.

“I’ve run in conditions worse than this — when I was younger,” he said. “The older you get, the worse it gets. … I was ready as I get anymore, ready to go.

“That’s why we show up,” Habursky said. “We just start looking forward for it, come January and February. You know it’s coming, so you’d better start amping up your training a little bit. I do a few more miles, get a long run in.”

“At this point, we all feel a little roughed up at our ages,” Mike Lemaster joked. “It’s just part of me now. This is something I’ve been doing since I was 12 years old.”

“I try to get in as many long runs as I can to get ready,” Lemaster said. “Speed runs are kind of moot at this point.”

Lemaster, who hails from Columbus, said his practice runs often fall short of the real thing because of the lack of hills there.

Habursky was unable to complete the half marathon.

“My hip was just killing me,” he said.