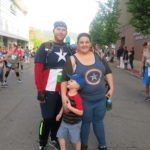 Photos by Brooke Miller Left: Daniel Dorsch and Brandy Dorsch prepare Saturday for the Ogden Newspapers Half Marathon Classic with their son, Balin Dorsch. They were dressed in Captain America clothes for the event. Right: Ashley Stopa cools down after running the 5K race.

WHEELING — Two runners who participated Saturday in the half marathon are trying to do more than just run around Wheeling: They want to run in all 50 states.

So far, he has completed races in Pennsylvania, Nevada, Ohio and West Virginia. He will be running his next race in Virginia Beach in September as a sponsor for St. Jude Children’s Hospital.

When asked about the matching Captain America clothes, he replied, “I wear it because it’s my son’s favorite super hero.”

Ashley Stopa, a native of Parkridge, Illinois, came to the Ogden Races to run the 5K. West Virginia marks the 13th state on her list, and she’s racked up others such as Wisconsin, Indiana, Missouri, Pennsylvania, Texas as well as her home state.

She started the 50-state challenge when her mother, at 60 years old, decided she wanted to run a 5K. Since then, it has turned into a bonding experience filled with travelling and running.

“West Virginia was significantly harder than Illinois, and I’m glad the last stretch was downhill,” Stopa said. “I did really enjoy the bridges and sights, though. They were great.”

Overall, she said she felt good about her race.