Sister and Dad ‘Fight for Frank’ 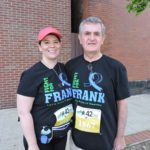 Photo by Shelley Hanson Melissa Shuler, of Weirton, prepares to do the 5K Walk with her father, David Shuler, in support of her brother, Frank Shuler, who is battling a rare blood disease.

WHEELING — Weirton resident Melissa Shuler made a promise to her brother, Frank Shuler, and kept it again Saturday during the Ogden Newspapers Half Marathon Classic.

Shuler, along with her father, David Shuler, participated in the 5K Walk in support of Frank Shuler, who is battling a rare blood disease called HLH or hemophagocytic lymphohistiocytosis.

The promise was made when Shuler, a nurse by trade, was trying to convince her brother to try one more medicine that she believed would help him. He was resistant because he already was taking dozens of pills related to a stem cell transplant. When he finally said OK, he asked her what she would do in return. Although she had not ran a long-distance race before, she promised to do the Pittsburgh Half Marathon in return for his promise to her.

“I never did a marathon in my life,” Shuler said.

And she hasn’t stopped racing since.

When she told her father, David, that she planned on doing the Wheeling race, he volunteered to do one with her. They chose the 5K Walk. David Shuler said he competed in track and swimming at then-West Liberty State College. But that was many years ago. He even was an All-American in cross country there.

When talking about his son’s continuing battle, it was difficult for David Shuler to hold back his tears. Frank, who is a physician himself, has had two stem cell transplants and neither seem to have taken. He’s been on chemo treatments for the past two years.

“It’s for him,” David Shuler said.