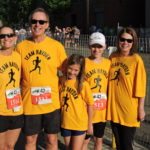 WHEELING — Once the youngest competitor in the 5K race, Hayden Walton said his family has been backing him since his first run at the age of 6 in 2012.

Each year since, Hayden’s mom, sister and grandparents have gathered to run the 5K and spend time together as a family as Team Hayden.

Hayden’s 70-year-old grandfather, Don Orlando, has spent his career focusing on health, and uses the event as a means to get the family thinking about their wellness too.

“We just wanted an excuse to get together over Memorial Day weekend,” Orlando said. “I’m a retired pharmacist, so I’m kind of into health. We found this is a good, healthy way to keep disease at bay and reunite.”

Orlando has been involved with the race since it was known as the Elby’s Distance Race, where his daughter also joined in.

“We have three generations running together,” Orlando said. “I’m the grandfather; my daughter, Melissa, used to live in Wheeling, and now she lives in Virginia.”

Hayden was flanked by his mother and grandfather, as well as his sister, Brooke Walton, and grandmother, Darla Orlando. Brooke and Darla did not participate in the race.