Non-competitive race is cutest of them all 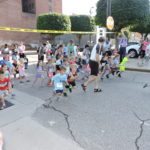 Photo by Shelley Hanson Children take off Saturday from the start line during the Ogden Tiny Tot Trot on Water Street in downtown Wheeling.

WHEELING — They might be small, but they’re also mighty.

The Ogden Newspapers Half Marathon Classic’s smallest — and cutest — racers took to Water Street on Saturday for the annual Ogden Tiny Tot Trot.

Martins Ferry residents Terrie and Harry Wright, grandparents to 3-year-old Armoni Ray, brought Armoni to the race while his mother, Amy Wright, was at work.

“He is really fast,” Terrie Wright said. “He’s really active and likes to be outside.”

“We thought this was a good opportunity to introduce Miss Aurora to running,” Smith said of her first try at the Tot Trot.

Weirton resident Brandy Dorsch brought her 4-year-old son Balin to the Tot Trot while her husband, Dan Dorsch, participated in one of the walks.

“He wanted to be like daddy and get a medal,” Brandy Dorsch said of Balin’s plan to trot.

At the finish line, the trotters were all given a medal for participating. Each of their race bibs had a No. 1 on them. Greeting them at the finish line and passing out the medals were members of West Virginia University’s Dance Team Morgan Pitcher, Grace Myers and Caton Kadylac.